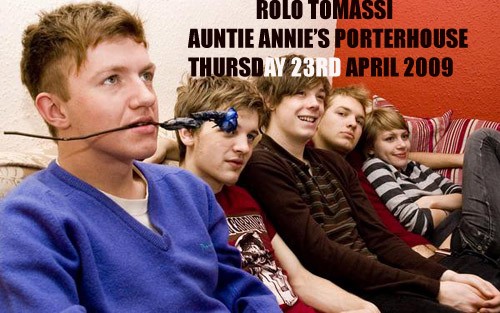 Rolo Tomassi name is taken from the fictional character Rollo Tomasi in the film LA Confidential. The band self-released their first demo shortly after forming and then the band pursued a tape release via danger!laser!phaser!razor! where only 200 copies were made. After a split EP with Mirror Mirror the band signed to Holy Roar records after building up a reputation for a fearsome, energetic live show. With Holy Roar the band released their most famous release to date, Their self titled EP. This EP featured re-recorded songs from previous demos and EPs amongst newer songs.To support this EP the band toured up and down the country numerous times, mainly supporting bigger bands such as I Was A Cub Scout and 65daysofstatic. In June 2008, Rolo Tomassi played a very well received show at Download Festival and more recently played support to Foals in the Mandela Hall back in November.
For more see:cdcleisure.com/myspace.com/rolotomassi
ROLO TOMASSI
AUNTIE ANNIEâ€™S PORTERHOUSE
THURSDAY 23RD APRIL 2009
Ticket Price:Â£7.50 (Subject to booking fee)
Doors:9:00pm
Support:The Wounds
TICKET DETAILS
In person:From 22 Ticketmaster outlets province wide (Including Zavvi formerly Virgin) / Katy Dalyâ€™s Bar
24hr hotlines:Tel: (NI) 0870 243 4455 (ROI) 0818 719 300
Buy online: geturticket.com/ticketmaster.ie