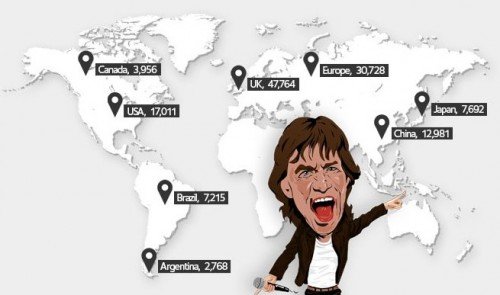 Ladies and Gentlemen they are back! The greatest rock ‘n’ roll band, The Rolling Stones, confirmed their long awaited return to the stage with four spectacular arena shows in London and New York…Millions of fans rush for just 30,000 tickets…Fans warned of overly high prices as demand grows.

However, with such huge demand viagogo is warning Stones fans to beware of being ripped off by chancers advertising tickets at astronomical prices on the smaller ticket sites, and auction sites like eBay.

Ed Parkinson, viagogo spokesperson, said: “This is a once in a lifetime opportunity to see the Rolling Stones so it’s no surprise that they are breaking records before they’ve even gone on general sale.

Unfortunately, there will be some unscrupulous organisations looking to take advantage of that. Always check reputable ticket market places like viagogo to find the true market value of tickets and never buy a ticket that isn’t 100% guaranteed.”