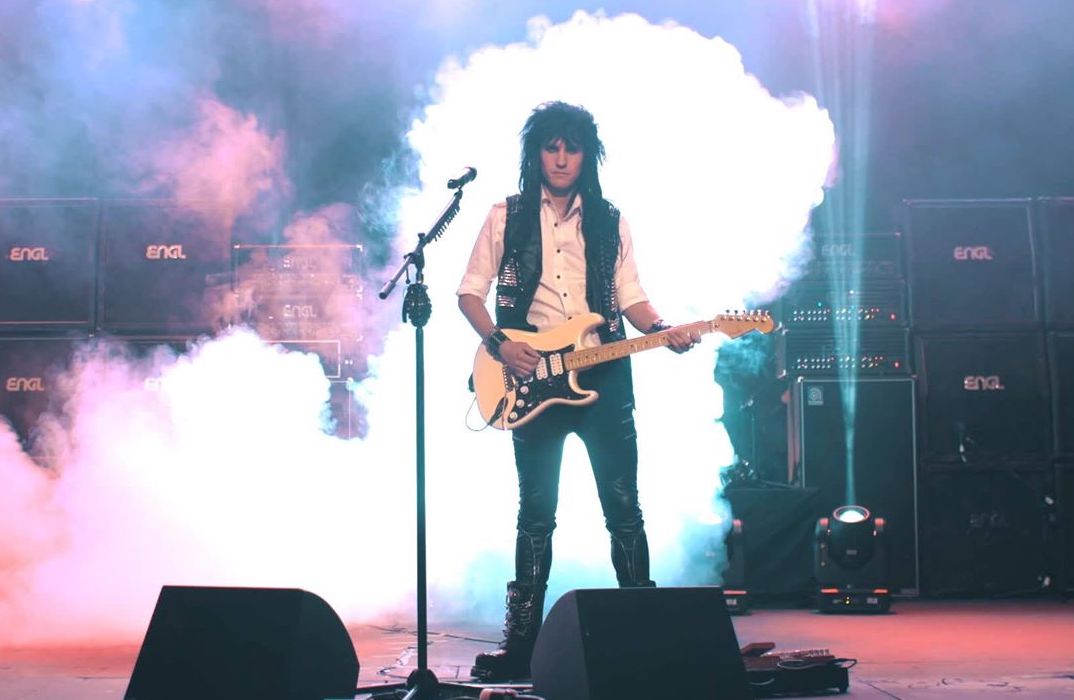 Rocky Kramer, although born in the 90’s is a child of the 80’s inspirationally. Much of his songs are motivated by music stemming from 80’s metal. Rocky began touring and headlining festivals and making his presence in the US known. He’s got the look, the magic, the spirit, and the talent to succeed.

We sat down with this guitar virtuoso for a quick Q & A to find out more about him….

How did music shape your life and become so important to you?

My parents not only loved music, but they made a living out of it. My mother taught piano and sang in a choir, and my dad was a first violinist in the Trondheim Symphony Orchestra. When my mom passed away shortly after my fifth birthday, it wasn’t unusual that my dad would bring me and my older brother to concerts. He also encouraged us to play an instrument, so I ended up taking violin lessons, and my brother took piano lessons. My brother also took an interest in guitar around this time. I wanted to play drums, so I made my own drum set out of ice cream boxes and played with pencils. That was my first band, and we would perform little concerts for our babysitter with songs my brother wrote. This ignited my interest in playing guitar and writing music.

When I saw smoke coming out of Ace Frehley’s guitar while he was playing an out-of-this-world guitar solo, I knew I wanted to be a lead guitarist in a rock band some day. When I started writing music regularly at the age of twelve, I wanted to start my own band. As a teenager, being a rock guitarist was my identity, which is why it was so important to me. I just couldn’t imagine myself doing anything else. I still can’t!

As a child of the 80’s who was born in the 90’s what songs would the soundtrack of your life include?

My music! I’m always writing the soundtrack of my life. That’s what’s so exciting about being a songwriter and composer. I can take my life, my situations, my feelings and make a song out of it. It’s a musical diary that allows me and others to get a glimpse of my younger self.

Being born in the 90s, I enjoyed the music that was made before I was born, much more than what was current at the time. This still applies today. The bands that impacted me the most at an early age were KISS, The Beatles, Queen and Pink Floyd. At the age of thirteen, I was mostly into AC/DC, Led Zeppelin and Ozzy Osbourne, until I fell off my bike and couldn’t play guitar for a week. My brother suggested I should listen to Swedish guitarist Yngwie Malmsteen, so instead of playing guitar, I was blown away by this incredible virtuoso. I spent the next years listening to other guitar players, including Steve Vai, Joe Satriani and of course, Jimi Hendrix. I’m always in search for new music, having explored most genres you can think of over the years. I wonder what I’ll be listening to in ten years.

If you could play on any stage in the world, where would it be and why?

There are three stages in particular that I would love to play someday. Wembley Stadium ranks very high, because of its incredible rock and roll history, and not just Queen and Live Aid. Unfortunately, the Wembley I would be playing is a completely different stadium than the one they were playing back then. Madison Square Garden is also an incredibly iconic venue that I would love to perform at. Watch out New York! Last but not least, if I all of a sudden become big in Japan, Budokan is on top of my list of concert venues. I have albums and DVDs from there and they all sound great, so I would definitely do my best to have the performance recorded and released.

What can we look forward to for your Tuesday shows on Twitch?

My Tuesday show on Twitch is appropriately called “Rock & Roll Tuesdays with Rocky Kramer” and is a music show where I perform rock and metal songs for a good 2 hours from 7 to 9 pm Pacific. I like to start the show with some rehearsed songs, then as soon as the viewers start requesting songs or talk about certain bands and artists, the journey to sometimes undiscovered territories begin. People from all over the world tune in, so it can be a lot of fun to just say hello and chat with them. It is developing into an international community of people who enjoy many different types of rock and metal, and that’s pretty neat! I’m also getting to interact with fans around the world. If it weren’t for the show, I wouldn’t have discovered some very loyal fans in Brazil, Canada and Guatemala for example.

How did you come to endorse Fender guitars?

It started when I bought my first Fender guitar at fourteen and totally fell in love with the Fender brand, particularly the Stratocaster which I own a number of today. I also own and play a Telecaster and Jazz Bass. My relationship with Fender started when I came to the U.S. and was introduced to their then Senior Vice President, Rich McDonald, by Kim Richards, who produced Firestorm.  Rich liked my playing and became a good friend. I had an opportunity to endorse Gibson, who make fine guitars, but Fender checks all of the boxes for me. My artist rep at Fender, Michael Schulz, really went out of his way to help with my Rock Star music video and has been incredibly supportive. Fender normally has a huge showcase every year at NAMM (although 2021 will be online due to COVID-19) and in addition to being able to see their new products, I get to talk to my artist rep and the actual luthiers and designers who keep their various brands leading the pack. Fender is a very dedicated company, which is why they’re the number one choice of millions of guitar players around the world, so it’s a wonderful brand to embrace. But remember that electric guitars require more than just a spectacular guitar, which is why I also endorse ENGL Amps, Jim Dunlop Guitar Picks, ClearTone Guitar Strings, Spiral Electric FX Pedals, Fractal Audio and JH Audio In-Ears. Each of those brands have been great to work with. I approach endorsements different than some artists. I only endorse products I honestly use and honestly love.

As soon as the world gets back to normal, what is the first thing you plan on doing?