AFTER his last two films flopped at the box office and were panned by critics, some may have thought Guy Ritchie was crazy for making another gangster movie. But his latest offering RocknRolla isn’t half bad.
The film centres on a real estate scam orchestrated by a Russian mobster and headed by London gangster Lenny Cole (Tom Wilkinson) with the help of his right hand man Archie (Mark Strong).

When the deal inevitably goes wrong, some of Londonâ€™s well known criminals become involved in trying to steal a piece of the millions. 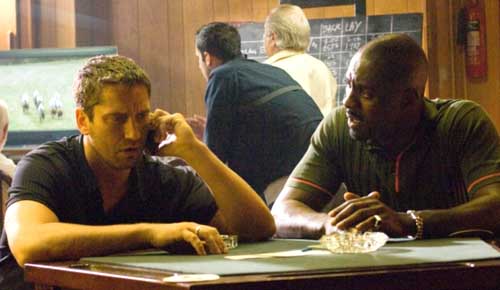 Even though his fast-moving and sometimes crazy plot is hard to follow, Ritchie is definitely back on form with this hilarious and unique crime caper.

With an A-list cast that includes Gerard Butler as the hilarious One Two and Thandie Newton as the cold accountant Stella, it is surprising that virtual unknown Toby Kebbell steals the show as drug addict musician Johnny Quid.

Although Ritchie has found it hard to recreate the magic of Snatch, RocknRolla is definitely on par and shows only a glimpse of the director’s potential.

With rumours suggesting the film is the beginning of a RocknRolla trilogy – and if this film is just a hint of what Ritchie can do – I definitely look forward to the sequels.
rocknrolla
Review by Laura Clarke
Â©Ink Well People