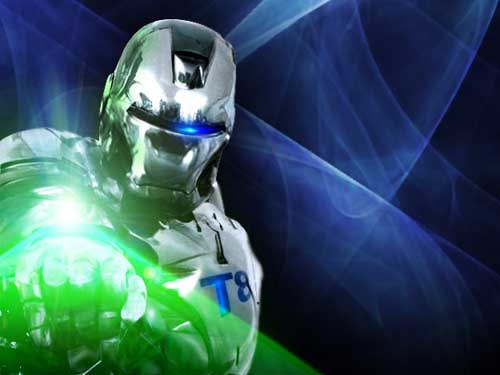 Electronic music brand Planetlove are going all out this festive season as they present their WKD Winter Party â€“ â€˜Dance Against The Machineâ€™, in the Kingâ€™s Hall on Boxing Night.And a very special guest, who has starred in an upcoming film and hip-hop music video, is set to be the star of the show!
â€˜T8â€™ is a highly mobile robot that has performed on television for the BBC and ITV, starred in the worldâ€™s most elite clubs including the Limelight (New York), Number 1 (France) and Le Pacha (Switzerland) and dazzled HRH Princess Anne and her family at The Royal Variety Show with a watching television audience of 18 million people!
Now this futuristic machine, which weighs half a ton and is made from steel and chrome, is flying in to Belfast from its home in Malta to entertain thousands of party goers as Planetlove celebrate the end of their 10th anniversary year in style!
The robot is the only one in the world with a futuristic ‘scan’ eye view system, unique LED lighting and a dual laser system â€“ resulting in one of the most fascinating lighting spectacles you are ever likely to witness.
â€˜T8â€™ is the brainchild of an international design team comprising of Graham Charles, Bob Saunders, Adrian Bankart and Bruce â€˜Robocopâ€™ Hansing.
Hansing is the creative artist behind numerous Hollywood blockbusters like Batman, Iron Man, The Fifth Element and of course Robocop, while Saunders and Bankart are the technical specialists behind many of Cirque De Soleil’s highly successful world famous shows.
And they claim â€˜T8â€™ is programmed not only to entertain, but also to scare;
â€œOnce in Dubai, ‘T8’ chased a princess around a palace and the guards didn’t know to laugh at it or try to capture it!â€ explains Charles and Technical Operations Director Adam Jones.
â€œPlanetlove Music have become world famous for presenting fantastic events.
â€œWe are honoured to be invited to be a part of this special night and we are happy to fly half way around the world just to be part of it.
â€œThat is how much Planetlove Music is respected in the music world,â€ they continue.
Catch â€˜T8â€™ alongside Armin van Buuren, Lisa Lashes, Alex Kidd, John Oâ€™Callaghan, Marcella Woods and DJ Mog at Planetloveâ€™s WKD Winter Party in the Kings Hall on Boxing Night, 26th December.
Tickets, priced at Â£32.50 +bf (standard) and Â£52.50 +bf (VIP), are available from ticketmaster.ie / planetlovemusic.com and independent outlets nationwide.