OLLY MURS IS CONFIRMED AS SPECIAL GUEST ON ALL DATES 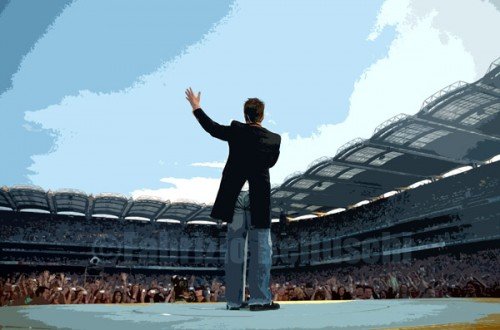 Robbie is back on tour! He will play a 15 date European stadium tour in 2013, starting with two nights at Manchester City Stadium on June 19 and 21.
The tour, his first for over 6 years, then travels to Glasgow Hampden Park (June 25) and London Wembley Stadium for 2 nights, June 29 and 30.

Robbie said: “I’ve got such a buzz out of playing live again this year. The shows we have done have reminded me how special it is to play my songs in front of a huge audience, with all the excitement and adrenaline that it can bring. Bring on 2013!!”.

Olly Murs said: “Everyone knows I am a huge fan of Robbie, and I’m honoured to call him my friend. He’s been a huge inspiration to me and given me so much advice throughout my career so far. When he asked me to join him on tour I was over the moon!”

These dates follow the incredible demand for his recent 3 shows at London’s 02 Arena, which sold-out in record time, with 50,000 tickets being sold in less than an hour. Ticket applications for the 02 were oversubscribed by 5000%.

Tickets for the 2013 dates go on sale on FRIDAY NOVEMBER 30 at 9am UK time (10am CET). tickets.robbiewilliams.com