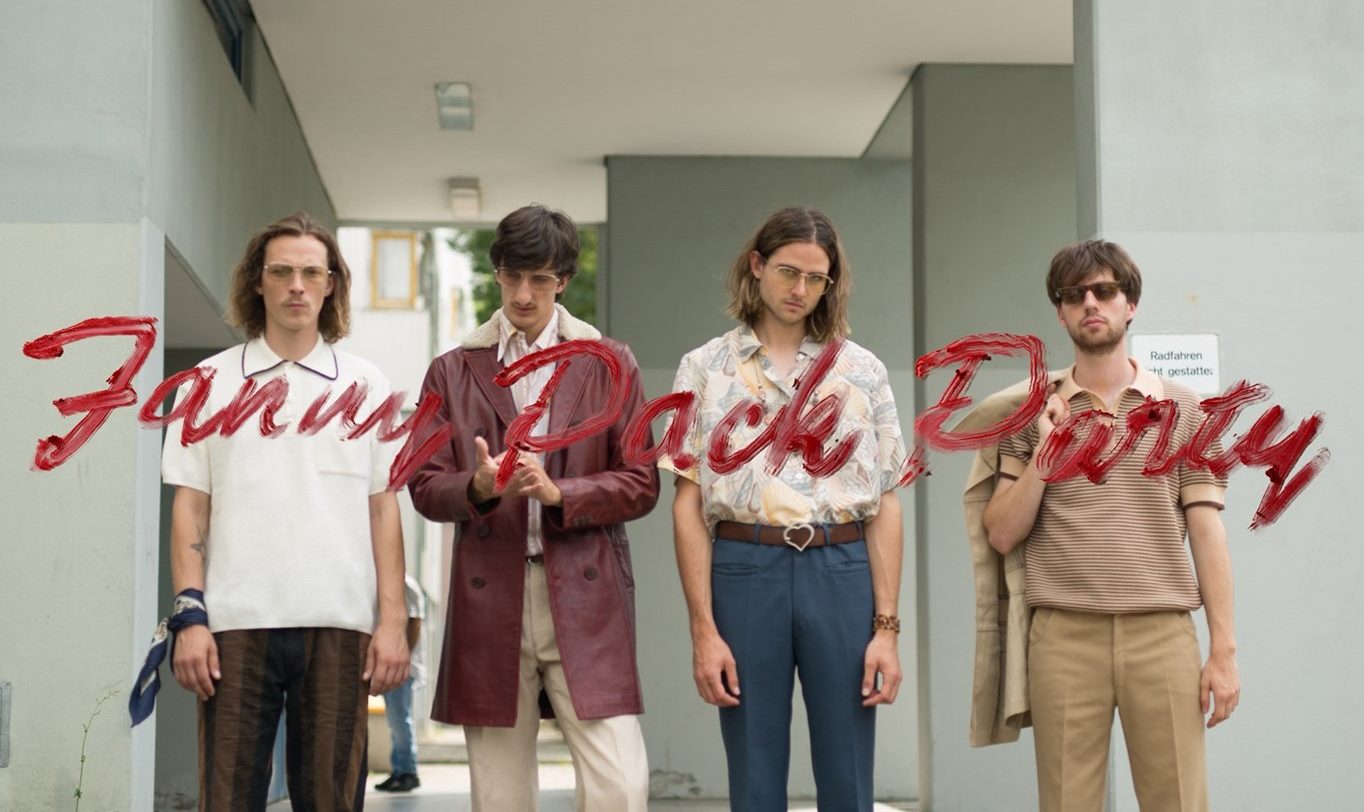 The electronic/pop group Rikas has just dropped their completely addictive new single Fanny Pack Party, which sums up their unique style perfectly. We wanted to hear a bit more from the guys themselves on their music, vibe and how they started out.

When did you first starting writing music together as a collective?

We’ve known each others since the early days, when the only problem was that your school crush wouldn’t even know your name. That inspired us to form our first band, to write cheesy pop punk songs, mostly about girls, and to get recognised. Then Rikas started after our school summer holidays, when we were busking our way through Europe in 2016. At that time it was hard to just focus on songwriting, because there were so many distractions we struggled with. The new songs emerged at a time we found a vibe. I think you’ll hear that.

We’re inspired by good entertainment in its various evolutions. We love to give a good show so we feed our hearts with all forms of showmanship. But more in a classic way. Striving through the old times, picking something from the past, making it your own. I think watching and listening to Rikas is like a kaleidoscope of how we’re looking into the past. In the end it’s music driven. I think that music can still be, even in times of social media madness, the most catchy form of art.

What music were you into from a young age and where do you find creative inspiration from now?

We have always loved artists like The Beatles, The Beach Boys, Michael Jackson, Elvis or even Lenny Kravitz and The Backstreet Boys. Those are the big names every kid would fall for even nowadays. I think the magic is hidden in the way they cheer you up. The songs speak to the soul of all people.

We used to cover a lot of their songs and performed them on the streets mixed with some of our originals.Today we dig a little bit deeper and find artists who may have inspired the big names. Finding a new tune always makes you wanna write your own jam.

What do you enjoy the most about working in the band together?

The best thing in being in a band is that you go through the same up and downs. I think it must be really hard if you work as a solo artists, you don’t really have anyone that shares the feeling you go through when you have a great show for example.

‘Fanny Pack Party’ is crazily catchy. Can you tell us a little bit about the making of it? Where did the initial idea come from?

For a really long time, we’ve had the idea of writing a song called “Fanny Pack Party.” We did not have a melody or lyrics but we always thought it’s a great song title.

It might sound silly in the first place but the song is trying to tell the story of a drug dealer running around town, always on the go, always on the run with the police breathing down his neck – the most important contact for everyone who knows him: “Everyone’s looking for the fanny pack!” A little bit like “Ricky don’t lose that number” by Steely Dan. I think in the end we were really inspired by Quincy Jones when it comes to the studio production. We wanted to make it sound sharp and on point and we added so many different elements like strings, a flute, synth bass and lots of percussion. We are very proud of the result and can’t wait to share the story of the man with the Fanny Pack.

How have people received the track and video so far?

Very good. The feedback has been great and last weekend we played a festival in Hamburg called MS Dockville. The whole crowd was singing along and they were even swinging their Fanny Packs. That was a fun moment and we were like “Okay, the people get it“

How would you describe the Rikas sound?

It’s a bit like going out on a date with a person you’ve known for years. A bit weird at the beginning, but when you’ve gone through the uncomfortable small talk and start enjoying the harmony that surrounds you it’s the most fun! Catchy, familiar, colourful and a bit like a vacation.

We live in our hometown Stuttgart! After a long run of shows it’s the perfect place to call home. Nevertheless we wouldn’t have time to move to another city. This year we recorded our album in the south of Spain and Berlin with the festival season starting right after that. Our own headline tour in November will take us through Germany, Austria, Switzerland and Luxembourg. considering 21 dates. And next week we will be playing a festival in Sweden.  So this year we feel like nomads.

What have been your 2019 highlights so far?

Recording an album was definitely one. We’ve put a lot of effort into it which moved us together as a family even more. And of course there where some festival highlights: playing the big ones we went to as little dreamers. Magical moments.

What else do you have planned for the rest of the year?

We are going to release our debut record ‘Showtime.’ It will be out 11th of October bringing entertainment to a whole new level. We want to bring  that onto stage, playing a first bash of Germany shows and hopefully soon some Europe dates as well.