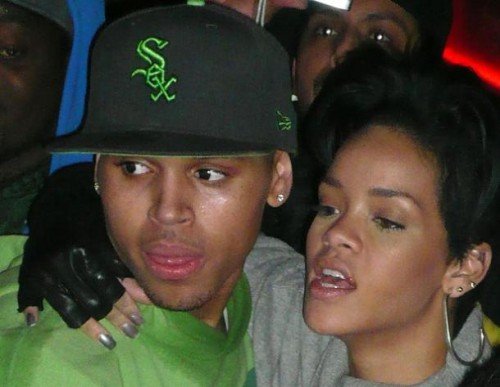 For a while now we could say without guessing that Rihanna and Chris Brown are back together on some level, but that “level” never included sucking faces and rubbing uglies on each other—that is…until today.

A relationship confirmation comes in the form of some lustful behavior at Rihanna’s Halloween bash at Greystone Manor in West Hollywood on Wednesday, featuring lover stares, lip locks and lap dances.

“Rihanna was all over Chris Brown all night giving him amazing and dirty lap dances,” the source tells Hollyscoop.

According to the source, Brown showed up with an entourage of 16 male friends, one of which was comedian and the 2012 MTV Video Music Awards host Kevin Hart. Rihanna was seated with six of her female friends.

While they didn’t show up together, their tables were adjacent and it didn’t take long for the ex-couple to have their hands all over each other.

Other than the mega-PDA that Brown was happy to entertain, the R&B artist has been on the receiving end of some serious hate for showing up to the party dressed as a member of the Taliban.

Rihanna, on the other hand, went for a “tamer” look in her portrayal of a “weed princess.”
By John Howard
READ MORE hollyscoop.com