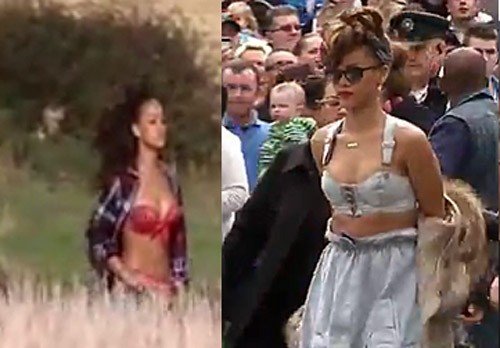 R&B and Pop Superstar Rihanna vowed to give up sweet treats when a rather mean-spirited follower pointed out that the she looked as if she’d put on some weight as she filmed her new video for ‘WE FOUND LOVE’ (ft Calvin Harris) in Northern Ireland.

And instead of telling them off, Rihanna retweeted the message on her profile.

The fan sniped: ‘@rihanna looks fat in the we found love pics.’
Rihanna replied: ‘I peeped that too *puts down donut*.’

The singer was mobbed as she filmed scenes for the new video in Belfast’s New Lodge yesterday.

Earlier this week, she upset a Christian farmer in Bangor after strutting around in a skimpy outfit and was kicked off his land that she was filming on. metro.co.uk
rihannanow.com
facebook.com/rihanna