Ricky Gervais has confirmed a date at The O2, Dublin on Friday 23 April as part of his Science Tour. Ricky Gervais has been touring the UK since last autumn with his sell- out smash hit show Science.

So far in 2010 Ricky Gervais has hosted the Golden Globes in LA; will be releasing his highly anticipated British film ‘Cemetery Junction’; an animated series of his hit audiobook series ‘The Ricky Gervais Show’ will be broadcast on HBO in the US and Channel 4 in the UK, and his award winning book ‘Flanimals’ is being made into a Hollywood movie. 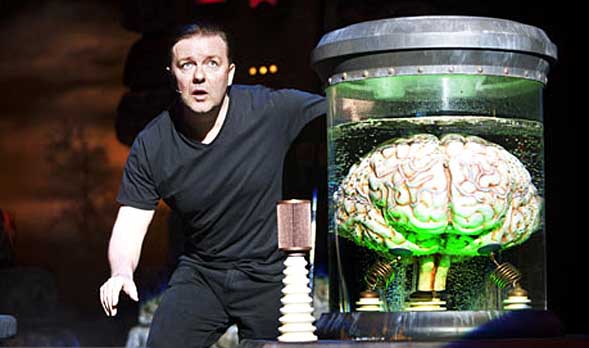 Something of a late-starter, at least in terms of comedy, Ricky is well aware that his chosen route to success whilst preferable, was certainly not typical.

Born in Reading in the early sixties, he made it to university in London where he breezed his way through to a degree in philosophy. After a brief career in a pop band he dallied with the odd job here and there making ends meet before a longish stint running the entertainments at a students’ union.

The long years of discos, pub quizzes and guitar bands were punctuated with brief dabblings in the music business. He managed a band called Suede for a bit (walking away shortly before they were signed), promoted a Queen tribute band and generally bothered music industry types with his unfocussed ambitions. 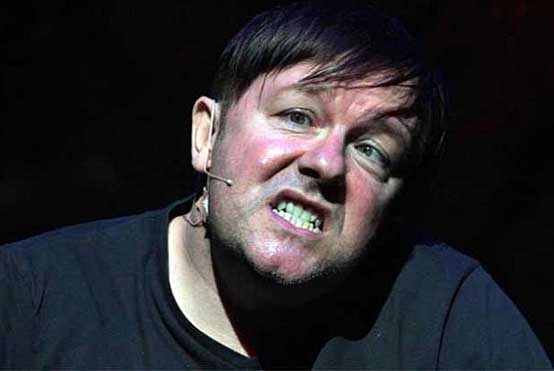 Following that came a portentous appointment with the then fledgling and unlicenced radio station Xfm. It was here that Ricky took on a new assitant, Stephen Merchant, who would later become co-writer/director of ‘The Office’.
Although Ricky wasn’t hired to be a broadcaster, he quite fancied giving it a go and a nightly programme was slotted into the schedule ready for the station’s proper launch on 1 September 1997 (not the best choice of dates as it turned out).

Five nights a week plus the day-job is clearly too much for anyone to manage. And all that talking to do in between records? Obviously you need at least one other person involved to share the burden. So a lone late-night ten-hours became 120 minutes on a Sunday afternoon chatting to a mate. “I’m Ricky Gervais… obviously. With me; Steve Merchant”. They’ve been doing it off and on ever since.

In 1998, Xfm was aquired by Capital Radio and format changes to Xfm saw Ricky free to explore his comedy talents in other media. A bit of sketch writing here and there, popping up on Radio 1 every so often, followed by first appearances on the TV;

Ricky wrote and starred in a one-off called ‘Golden Years’ about a businessman who is obsessed with becoming a David Bowie lookalike. Remember, write about what you know.

‘The 11 O’Clock Show’ – a topical comedy magazine series. Ricky adopts the persona of a half-knowledgable biggot to drop in on the regular team of presenters. An outrageous and refreshingly funny foil to the satirical Oxbridge pretentions of the show itself.

‘Meet Ricky Gervais’ came hot on the heels of Ricky’s popularity in the 11 O’Clock Show. Concieved as a chat show with games, the structure mainly served to allow Ricky the opportunity to say rude words, make guests say rude words and make it all official by virtue of the fact that it was being shown on TV. That said, a running gag filmed and written by Ricky and Stephen Merchant as links between ad breaks showed a glimpse of what was to come.

The show finished in October 2000, but Ricky and Steve had already been developing their ideas for an office-based mock documentary, and months if not years of work would come to fruition on 9 July 2001 when the BBC aired the first episode of ‘The Office’.

Twelve episodes and a two-part Christmas special later and The Office is consigned to broadcasting history as one of the most perfectly crafted comedy series in British TV ever. Showered with awards and critical acclaim the series’ pivotal creation David Brent became a household name and so, of course, did Ricky.

Perhaps slightly embarrassed by the accolades and not having earned his comedy spurs by years of telling jokes to drunks in smoky bars up and down the country, Ricky put together a stand-up show to while away the evenings away from home during filming. The resulting tour, encompassing at least two theatres within a mile radius of his house, was a smash and must have dispelled any lingering doubts about doing live work as he’s followed the ‘Animals’ show this year with a new show entitled ‘Politics’. And it was a proper UK tour this time too with shows in as many as six places outside London.

With seven and a half hours of The Office produced in a three year period you wouldn’t think there’d be time enough for anything else would you? But you’d be wrong of course. Voice-overs in ads, animated films and the like, small parts in films – generally for mates, a cameo role in an American TV series called ‘Alias’ plus regular appearances on top chat shows like ‘Parkinson’ and ‘Friday Night With Jonathan Ross’. He even found time to take part in a four-week training regime culminating with him beating a minor celebrity in a televised boxing match.

In the run-up to Christmas this year, Ricky will be busy telling us about his new book – ‘Flanimals’. Ostensibly aimed at younger readers, but the richness of the illustrations and the inventiveness of the text give it universal appeal.

DVDs of the Politics show and The Office Specials are also out for Christmas so expect to see lots of cardboard cut-outs of Ricky in stores over the next few weeks.

After that it’ll be full steam ahead for ‘Extras’, his new TV series – more about that to come.

One last thing – many online biographies make reference to Ricky having worked as a pizza deliveryman. Just to put record straight, Ricky has not ever delivered a pizza… eaten, yes. Lots. Too many probably. But delivered them? Never.