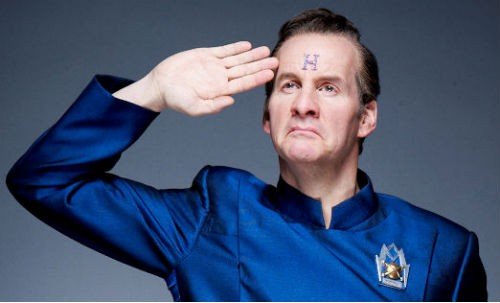 COMEDIAN Chris Barrie, best known as Rimmer from Red Dwarf is headed for Belfast today. But it’s not the first time the funny man has come to Northern Ireland.

Chris, previously known as Chris Brown, was a student at Methody College Belfast where he gained himself quite a reputation as an impressionist and comedian.
His father worked here for around ten years during which time Chris attended the school.According to former students Chris regularly entertained classmates, teachers and younger students with his antics.

However, despite being able to mimic many of his teachers Chris revealed he wasn’t always their favourite student.He revealed: “I have many friends in Northern Ireland and some family so I do like to get back. I did go to Methody for around ten years and one of the things I would do is mimic the teachers. I remember one incident where I mimic’d the Latin teachers and I called up the French teacher and asked her out. I wasn’t very popular after that.”

Today Chris is hoping to bump into some of those old school friends at the first Belfast Comic Con at the Kings Hall. The exhibition which has been running all weekend will see thousands of sci-fi fans, gamers, comic collectors, movie buffs and anime enthusiasts descend on the annual event.

Guests such as Chris Barrie, Robert Llewellyn and Hattie Hayridge – aka Rimmer, Kryten and Holly the Ship’s Computer will be meeting fans, signing autographs and presenting on-stage panels today as well as former S Club 7 star, Hannah Spearritt who has starred as Abby Maitland in all five seasons of sci-fi drama Primeval.

And while Chris isn’t a keen gamer or comic lover he said he finds it easy to relate to people who are very passionate about something they love. “2014 has been the year for conventions I’ve been to a lot of them. It’s been well documented that I’m passionate about classic cars so I can completely understand why people are passionate about things like science fiction.”

Chris’ personal car collections have included a 1950s Triumph TR2, 1960s MGB-GT, 1950s Wolseley 1500 and a 1960s Jaguar XJ6. Chris is probably best known for his role in Red Dwarf, as one of the voices on Spitting Image and as incompetent leisure centre owner Gordon Brittas in The Brittas Empire.

The original run of Red Dwarf ended in 1999 with a return in 2012 for one series. Earlier this year it emerged that series 11 was being written. Chris confirmed: “There have been some emails back and forward about series 11 of Red Dwarf but I think that might be delayed at this stage.” The star reckons the show could be set to make a return in 2015.

Tickets for MCM Comic Con Belfast are still available for today, open until 6pm, from mcmcomiccon.com/belfast