THERE aren’t many events that leave me completely in awe of the fashion and style but this year’s annual Fate Awards in association with Diet Coke certainly were one of the highlights recently. 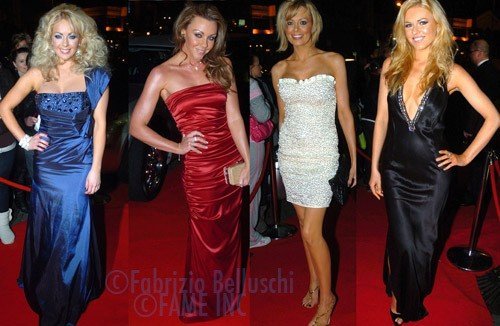 Of course it was the ladies who really stole the show with their stunning ballgowns and cocktail dresses. I wore a full length midnight blue dress at the beginning of the night from designer Jenny Packham, available from Blush on the Lisburn Road.

Models Zoe Salmon, Orlaith McAllister proved style and glamour is not something you can teach, it’s natural.

Of course the men showed it is possible to glam it up Citybeat’s Robin Elliott matched a velvet jacket and a swarovski clad tie with jeans, and he wasn’t the only one as Roger Taylor also opted for jeans and a funky jacket.

With everything from high street and designer to internet bargains and one-off designs such as the Una Rodden number worn by Tracey Hall just a few days after fashion event Spring Into Summer Belfast proved we’re just as fashionable as any other city in Europe.

EAMONN HOLMES & RUTH LANGSFORD
Sky News star and Belfast born TV presenter Eamonn Holmes was at the awards to pick up the Legend of The Year Award.
He was joined by fellow presenter and fiancee Ruth Langsford. Eamonn was wearing a suit by Chris Kerr in London and Ruth said she opted for this beautiful green dress from Phase 8.
Eamonn added: My suit is actually too big for me, which I think is a great sign.

BEN CLARKE & JENNY KIRKWOOD
Apprentice star Ben Clarke took to the red carpet with his girlfriend Jenny Kirkwood. Ben said: wearing just a normal double breasted tux with blue braces. And I am priding myself on being one of the only people who will be here who have tied their own bow tie.
By the way if you can’t tie a bow tie, always make sure you wear a clip on one and then bring an undone one that you can wear later in the night.

Benâ’s girlfriend Jenny was wearing a black and white satin dress. She said: Its not a designer number but it’s a beautiful dress that I fell in love with from a little boutique in Edinburgh.

ZOE SALMON
TV presenter and Former Blue Peter star looked stunning in two fabulous dresses from the Lisburn Road in Belfast.
She said: My dresses were from Beverley Hills Galway and Harrison Boutique. I loved the fact that they were contrasting to each other.

KIM WOODBURN
I’m A Celebrity and How Clean Is Your House star Kim Woodburn stepped out in a beautiful black dress by Frank Usher who she revealed was her favourite designer.
But the clean freak also confessed: Frank is followed very quickly by M&S, but if I’m honest while I like dressing up I really love relaxing in a pair of leggings and a baggy T-Shirt.

GAIL PORTER & JONNY DAVIES
TV presenter Gail Porter made quite an impression from last year as she appeared on the red carpet with a cute pixie like blonde hairstyle.
The star, who has been suffering from alopecia, debuted her new hairstyle at her birthday a few days before.

She said: My jewellery was designed by my boyfriend and my clothes designed by a friend under the label Hero Zero. My shoes are from Schuh.

DARIUS CAMPBELL
Popstar to Operastar singer Darius Campbell who revealed he was back in the studio writing and recording a new album wore Hugo Boss.

RORY MCILROY & HOLLY SWEENEY
Northern Ireland golfer Rory McIlroy was joined on the red carpet by his girlfriend Holly Sweeney. Rory was wearing a suit from Cruise and Holly was in address from Nine Chichester Street, Belfast.

EMMA ROSA DIAZ
TV presenter Emma Rosa Diaz stunned Fate party goers in this fabulous full length Tony Bowls gown from Jourdan on the Lisburn road in Belfast.
She added: Everyone was complementing me on my dress so I was absolutely delighted with my choice.

PETE & JULIA SNODDEN
Cool FM breakfast star Pete Snodden arrived at the glitzy dinner with his stunning wife Julia.
Pete was wearing All Saints and Julia was in a beautiful outfit from Reiss.
CAROL MCGIFFIN
Loose Women star Carol McGiffin partied the night away in this red Isa dress.