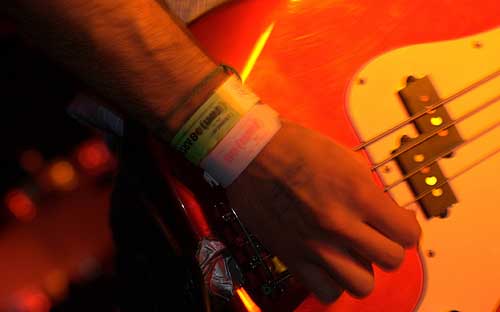 Welsh rockers Future of the Left return to The Stiff Kitten on May 16th, following a stunning headline performance in the venue last November, and a hugely memorable show opening for The Enemy at last year’s Belsonic event.

The brainchild of Andy Falkous, ex-frontman of seminal Post-Punk rockers McLusky, Future of the Left combine the precise riffs and ferocious attitude of their previous incarnation, with an undeniably poppy edge. Their critically acclaimed 2006 debut release ‘Curses’ was an aural assault, showcasing both their witticism and alternative rock roots (‘Small Bones, Small Bodies’), along with the new ground them seem intent on breaking (‘Manchasm’).

Following 2 years of relentless touring and an exhaustive release schedule, the band enamoured themselves to Club + Festival audiences across Europe, Asia and North America, and won the affections of daytime Radio 1 listeners, as well as huge support from NME.
Now, ready to unleash their highly anticipated second LP, Future of the Left are set to cement their position as one of the U.K’s most exciting alternative acts.
Future of the Left
& Pulled Apart by Horses
The Stiff Kitten
Saturday 16th May
**Early Show â€“ Doors 7.30pm**
Admission Â£8, tickets available from Ticketmaster Outlets, The Stiff Kitten bar and online at thestiffkitten.com