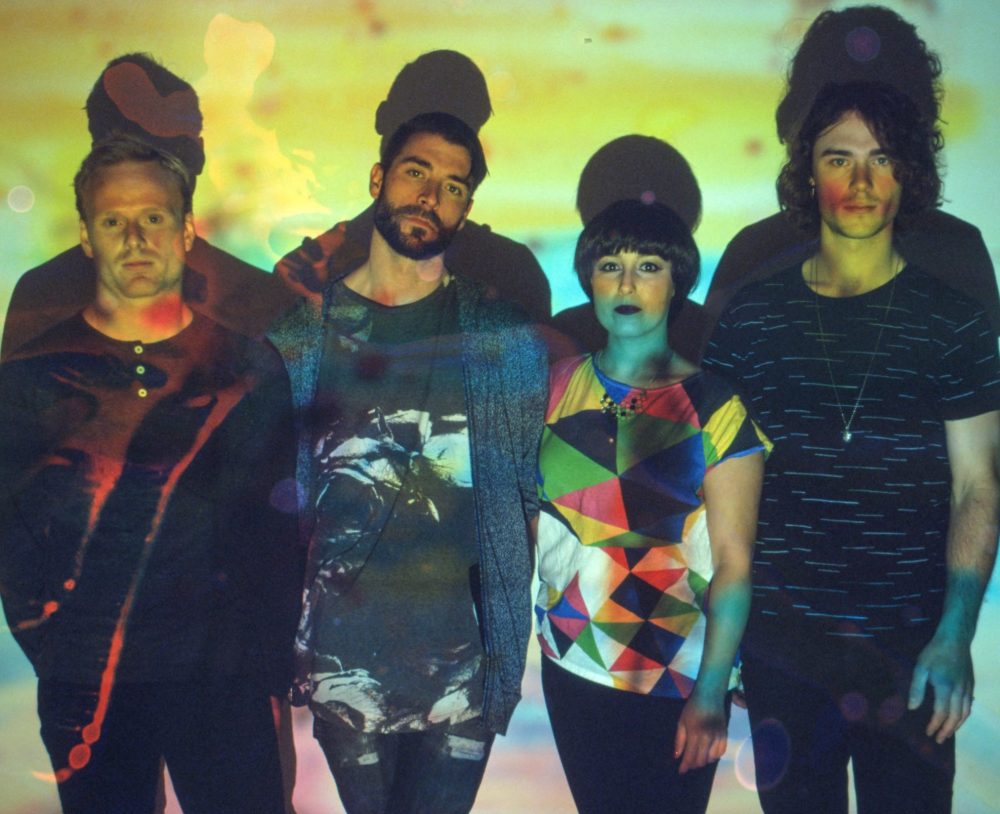 Hi RALEIGH how are you today?

RALEIGH (Brock): Hey! Today was a good one. Spring has finally struck here. I wasn’t sure the sun would ever live again after the winter we had. Sitting on the steps with a coffee this morning was pretty terrific.

RALEIGH (Brock): We’ve all been playing in bands, making records, or working in the music scene putting on shows, or working in venues for a long, long time. The MUSIC part of the music career is the greatest thing in the world. We’re pretty grateful to get to play music around the world and have people respond and share experiences with us.

RALEIGH (Clea) : Because my older sisters played music, I startarted paying before I can remember. I think it has always existed in my mind as a creative tool to connect and express ideas with people. It is less about a career and more about the form and ability of music itself.

Tell us about your single ‘Smoke In Our Eyes’ and your connection to Broken Social Scene.

RALEIGH (Brock): We were invited to an artist residency at an incredible artist centre in the Rocky Mountains called the Banff Centre for the Arts. The program was curated by Brendan Canning, Charles Spearin, and Kevin Drew from Broken Social Scene. I’d worked with Charlie on another project previously, but this was our first introduction to that gang as RALEIGH. We basically spent two weeks working on the music that would eventually become ‘Powerhouse Bloom’. Workshopping ideas, trying things, throwing them away, discovering new stuff. Working with people and arriving somewhere collectively is one of the greatest things about playing in a band.

The song is inspired by a cat we had named Casper. He loved hanging out with us while we jammed, and fall asleep next to speakers or right underneath Clea’s cello. The studio day on ‘Smoke In Our Eyes’ went deep into the night and was becoming pretty “experimental.” Lots of throwing ideas at it, to see what might stick. Brendan snuck a cool 12 string part in around 4AM that night. I like hearing a snippet of someone else’s guitar playing on our record.

When writing your album ‘Powerhouse Bloom’ what was the writing process like and how did it develop between the members of the band?

RALEIGH (Brock): Powerhouse Bloom came together over an extended period of time. We were in no rush to get a record out, so we gave ourselves as much time to really explore where we wanted it to land. A few of these songs were recorded and demoed two times, deconstructed, and revised before the proper album sessions even started. Once the songs were taking shape in a satisfying way, we became very into utilizing the studio as a creative extension.

RALEIGH (Clea) : When we began recording the tracks at the Banff Centre residency we were open to the input of the amazing producers (mentioned above) and the great engineers we were working with Shawn Everett (War on Drugs, Alabama Shakes), Graham Lessard (Timbre Timber), and Niles Spencer (The Tragically Hip). It was a cool way to approach our songs and having that many minds considering an idea leads to neat sonic results. As a band we do really intense but positive work on the material together. It involves patience and good communication… and patience.

What are the themes contained within the lyrics of ’Smoke In Our Eyes’?

RALEIGH (Brock): This song was written for our cat, Casper. The lyrics maybe come across as abstract, but they’re really quite literal. He’d sleep in the jam space, even if it was loud and smokey. “Far we’ll go away from here, with smoke in our eyes” is me wondering about where a little feline brain might drift off to when falling asleep next to a guitar amp or underneath the intense resonance of a cello.

RALEIGH (Clea) : Casper was so dynamo. He would pull these sneaky stunts. Hide in a doorway then chase you down attack style. He had such an imagination, and I think that that this track captures that energy.

As a Canadian band based in Calgary, were you inspired by your local music scene when you first started making music?

RALEIGH (Brock): Definitely. The community mentality that I was introduced to in Calgary’s is ultimately what led to the beginnings of RALEIGH. Will and I played in a band back in high school and Clea was part of this collective called the Summerwood Warren that put on all ages shows. They were always strange and themed and inclusive and fun. We got invited to play one of these shows. To me it felt like everyone doing something awesome musically in the city was in the room that night.

RALEIGH (Clea) : In retrospect it is crazy to think about all the talented musicians who are doing amazing things now who were germinating in that music scene a decade ago. We were lucky that Calgary has a very DIY attitude and we were surrounded by people who were going to get their hands dirty and make art happen.

Are there any bands from back home you would recommend to our readers?

RALEIGH (Brock): We’ve been spending a bunch of time between Calgary and Toronto lately. A couple of my favourite bands (and people) that have put out great records recently: Astral Swans (Calgary), Omhouse (Toronto).

RALEIGH (Clea) : Two wicked female artists I would add to that list are L.T Leif (Calgary) and Charlotte Cornfield (Toronto).

RALEIGH (Brock): Playing in Bowie’s band for the Station To Station era stuff would be incredible. So raw! So noisy. So much energy.

RALEIGH (Clea) : Lou Reed & The Velvet Underground. Just to hang in those times.

What can audiences expect from a RALEIGH live show when they see you at The Great Escape?

RALEIGH (Brock): We’ve put a lot of work into presenting the songs from ‘Powerhouse Bloom’ pretty true to the record. Lots of three dimensional sound. The show is dynamic… a little more “unhinged” in the raucous parts but still restrained in the intimate ones.

RALEIGH (Clea) : Something unique about our band is that Brock and I share vocal responsibility, so there is a relationship there not just a deliverance of the songs to the audience.

What can we expect from RALEIGH throughout the rest of 2018?

RALEIGH (Brock): Immediately after our two weeks in the UK, we’re on tour in Japan for ten days. That will be our first time there, so we’re very excited about that. We have a batch of Canadian shows scattered throughout summer festival season and into the fall.

RALEIGH (Clea) : We also have a bunch of new tracks we are getting together, so we are in a place where we are excited to share secret content that will arrive in your ears and eyes soon.