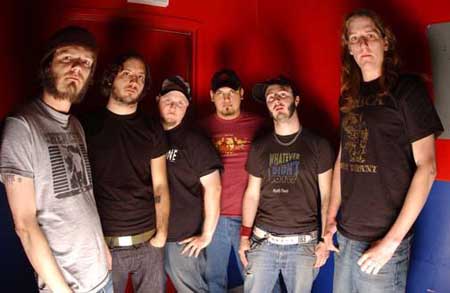 Raging Speedhorn came together as band in the small industrial town of Corby, England. The town itself would provide the depressing backdrop to their hate filled music.

Fuelled by boredom and frustration with their surroundings, the six friends would embark on a journey that would take them to highs beyond their expectations and lows that would drive them to the brink of insanity.

The original six were brothers John and Tony Loughlin, Gareth Smith, Frank Regan, Gordon Morison and Darren Smith. They playedtheir first show in the back room of their local pub, the Rockingham Arms, in late 1998. They would become known for their hectic, hardcore ethic of touring anywhere and everywhere. It didnâ€™t matter if it was Gravesend or Los Angeles, Hull or Tokyo, when they took to the stage mayhem ensued.

After two years of full on touring in the UK they went into the studio to record their first full length album. Theyâ€™d sold an incredible 1000 copies of a four track demo tape at shows up and down the country and their first, self titled album sold 22,000 copies in the UK alone, an astonishing amount for such an extreme piece of work.

The touring continued. And it spread to mainland Europe and even Japan. Another two years of touring lead to the recording of their second album, â€œWe Will Be Dead Tomorrowâ€. The album was another success, both in Europe and in Japan, where it sold 25,000 copies.

Just when it seemed like the next, inevitable step would take them in the direction of the USA, events turned the band upside down. Record company and management problems, constant touring with little pay and excessive alcohol consumption developed cracks in the unit. Tony was the first to go, although he would continue to work with the band as part of the management team. Then on the eve of their third album, â€œHow The Great Have Fallenâ€, Frank left the band.

Although the band managed to fit in their first tour of the USA with new boys Jay and Bloody Kev, guitarist and vocalist respectively, touring of the record was sparse. It looked like the end was nearing. Even more so when Darren, at the start of the writing process for the fourth album, announced he could no longer take the life that is Speedhorn, being constantly broke was indeed breaking him. Amazingly, from this Speedhorn found a new lease of life.

The band are now John and Bloody Kev on vocals, Gareth and Jay Thompson on guitar, Jayâ€™s brother Dave on bass and Gordon on drums. The new members of the band, as has always been the case, are old friends and allies. Bloody Kev sang with UKHC legends Hard to Swallow and Dead Inside, Jay and Dave played in old touring buddies Scurge.

The line up today is stronger than ever and the new album is a massive progression from anything achieved before. Itâ€™s the sound of everything the band has experienced over the last 9 years, the soaring highs and the darkest of lowsâ€¦it is truly epic.

â€œBefore The Sea Was Builtâ€ will be released, worldwide through SPV records in the year of our Lord, 2007.