Star DJ Scott Mills is cutting a pollution-free dash through London’s traffic after taking delivery of his new e-motive e3 electric scooter. The trendsetting presenter one of the UK’s most popular radio personalities moved to the forefront of the fashion for going fossil fuel-free when he took delivery of the stylish new runaround earlier this week. 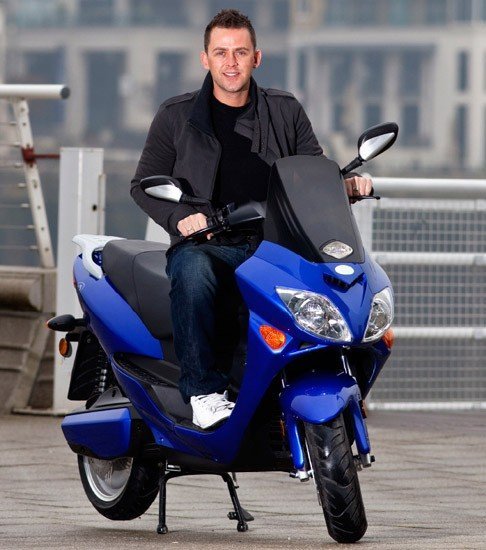 But the leading broadcaster, whose lively and entertaining show is compulsive listening for millions, did not choose the eco chic e3 for its eye-catching looks alone.

In fact, his new scooter is every commuter’s dream capable of zipping through traffic, able to be parked almost anywhere, completely free of road tax and totally exempt from the London Congestion Charge. 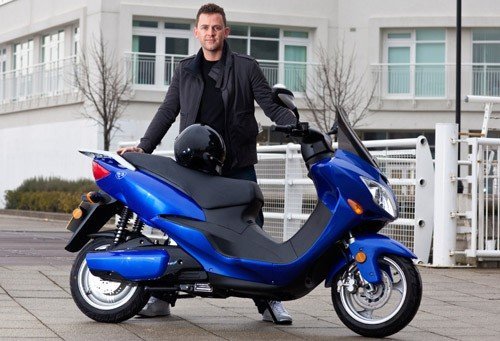 What’s more, the super-clean and near silent scooter uses the very latest battery technology to get riders from A to B without the CO2 hitting speeds of up to 55mph and able to cover 70 miles on a single charge.

However, fun-loving Scott is especially looking forward to cutting his journey times in and around the capital so he can find some extra free time in his hectic schedule of radio shows, TV appearances and gigs.

Scott said: I recently gave up my car as I found owning one in London was completely pointless. I was always getting parking tickets and was paying so much to keep something that just sat there unused most of the time.

But recently a few of my friends got scooters and they were always telling me how great they were and how they no longer had to waste time sat in traffic and so I started to look around.

The e-motive seemed like an obvious choice for me because it has all the benefits of a regular scooter but without the noise and pollution.

And Scott, found his first experience of riding the e3 particularly e-motive, as it was his first time in the saddle since his days as an aspiring 16-year-old apprentice on radio stations in his native Southampton.

He said: When I first started out I was doing shows in the early hours of the morning and my mum and dad got fed up of having to drop me off and pick me up in the middle of the night so I got myself a scooter. It was a really noisy and dirty old thing but I used to love it and it was brilliant fun to ride.

But my e3 is even better to ride and much more fun. And because it’s practically silent you really turn people’s heads as you ride past!
e-motive’s triumvirate of dynamic debut models the e1 e3 and e5 are available now through a growing network of professional and experienced UK dealers.

Starting from just £1399, each model in the range comes with a two-year, unlimited mileage warranty and two-year AA roadside assistance thrown in.

Scott’s super-versatile e3 retails at £2999 and is big enough to take two in comfort and is powerful enough to handle long A-road journeys with ease. What’s more, it’s state-of-the-art battery technology means it can be fully charged from any domestic plug socket in just four hours.
e-motiveuk.co.uk