He’s already climbed Kilimanjaro, but now BBC Radio 1’s Chris Moyles is set to mount a new challenge â€“ but this time it’s to stay awake for more than 37 hours, as he attempts to break the record for the station’s longest show in history, all in aid of Red Nose Day. 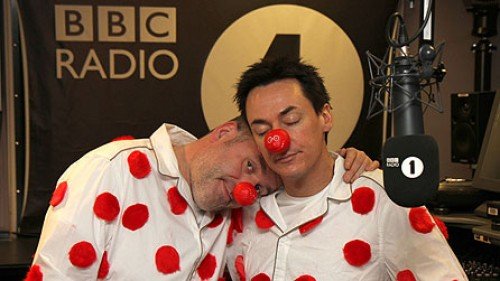 The record which currently stands at 37 hours was set by Simon Mayo for Comic Relief in 1999, and from 6.30am on Wednesday 16 March, Chris, accompanied by his sidekick Comedy Dave, will attempt to smash the record â€“ with support and encouragement from fellow Radio 1 DJs and celebrity guests along the way as they get more and more tired.

Throughout the record-breaking attempt the duo have to present each show in the schedule with the regular DJ as a guest, so Chris and Dave will be broadcasting with the likes of Fearne Cotton and Scott Mills through to the late night specialist DJs including Nick Grimshaw and Benji B which will be a completely new experience for them both!

Chris and Dave are aiming to break Simon Mayo’s record at 7.30pm on Thursday 17 March.

The record attempt will also be broadcast live in-vision on digital TV via the Red Button and online at bbc.co.uk/radio 1.

Each hour that Chris and Dave are on air they will be entitled to a five-minute break which they can either take each hour or save up to earn a longer sleep later on.

Chris Moyles says: “In 2009 I broke the record for being the longest-serving Breakfast DJ on Radio 1, so I thought, why not go for broadcasting the longest radio show on Radio 1 too! Of course I’m worried about what the lack of sleep will do to me, but the pain will be worth it if we can raise a fortune for Comic Relief.”

Comedy Dave adds: “I’d love to say I’m really excited about it, but every time we talk about the project I feel tired and start yawning!!”

BBC Radio 1 is available on FM, digital TV and online at bbc.co.uk/radio1.