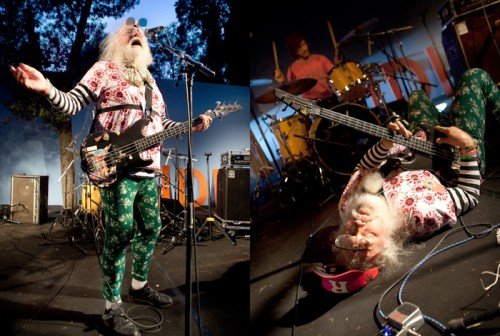 R Stevie Moore is fast turning into a 40 year overnight sensation. For the last 4 decades, R Stevie has been making albums and creating an impressive back catalogue.
That back catalogue consists of over 400 albums. The task of compiling ‘Lo Fi High Fives’ was something O Genesis supremo Tim Burgess had to keep moving on, sure in the knowledge that once they’d all been heard, R Stevie would have recorded another handful that would have to be pored over.

‘Lo Fi High Fives’ is just the tip of the giant foam finger. His back catalogue is best appreciated when he posts his songs and his own hipspeak messages.

“How much music can we take?” asks R Stevie Moore on the song ‘Show Biz Is Dead’, and it seems an odd question for this extraordinary artist to ask, for there can’t be anyone as prolific and as good as him working today.
R Stevie Moore has a back catalogue that some record labels would be proud of, let alone some artists.

Another things that’s great about R Stevie Moore – apart from his name, which makes him sound like a robot in an Isaac Asimov novel, even though his music is far from robotic and emotionless – is that he doesn’t just write songs called ‘Pop Music’, he makes Pop Music.
‘Lo Fi High Fives’ album released on 6th Aug.
By David Quantick
hrsteviemoore.com/
twitter.com/rsteviemoore