It’s one thing to see your favourite guitar hero in concert. But it is quite another to go to their house and have a jamming session.

Young Queen enthusiast Connor Walker was invited to jam with Brian May in his home, courtesy of Make-A-Wish Foundation UK, the charity that grants magical wishes to children and young people fighting life-threatening illnesses. 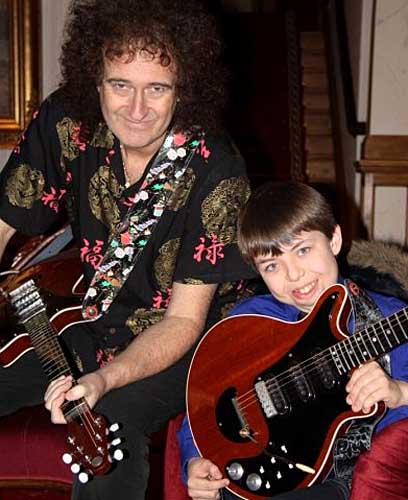 Connor, aged 13 from Kingsbridge in Devon, suffers from Neurofibromatosis, a rare genetic disorder that causes the nerve tissue to grow tumours, resulting in Connor having to undergo more than 18 operations.

Connor is also a massive Queen fan and to meet the band’s famous guitarist has been a long-held wish. On the day in question, Make-A-Wish arranged for Connor, along with his Mum Tammie, grandmother Natalie and sister Sophie, to be picked up in a limousine from their hotel and taken for lunch at the Hard Rock Cafe in London. 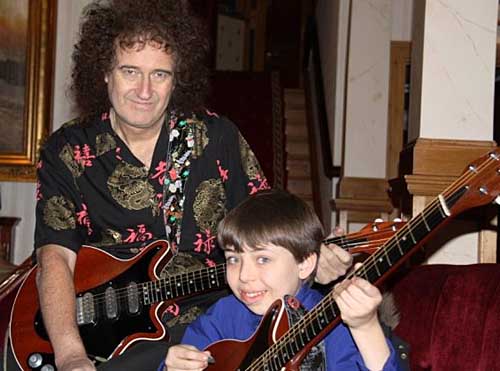 Sophie also suffers from Neurofibromatosis and was granted her wish to go to Disney Paris at the end of last year. They were then chauffeured to Brian May’s home, where Brian greeted the children with big hugs.

Connor had brought his guitar with him, which Brian signed and tuned before giving the family a personal tour of his garden. When they returned inside, two electric guitars were set up one for Brian and one for Connor.

After an hour’s jamming session and some one-on-one tuition on different tunes and chords, Connor emerged beaming and his mum tearful. Connor says: The day I met Brian was the best day of my life.

When I walked into his house and saw the two guitars set up, I was hoping one would be for me to play but I didn’t want to presume, so when it was it made me so happy.

Connor’s Mum Tammie says: Connor is an incredibly brave boy and never complains when he is in pain. To see Connor light up when he met Brian May brought a tear to my eye It was such an amazing day.

There are currently 20,000 children and young people like Connor and Sophie in the UK fighting a life-threatening illness. This year alone around 1,000 children will turn to Make-A-Wish to experience the magic of a Make-A-Wish wish. To grant all these, Make-A-Wish needs to raise at least £5 million in 2010.