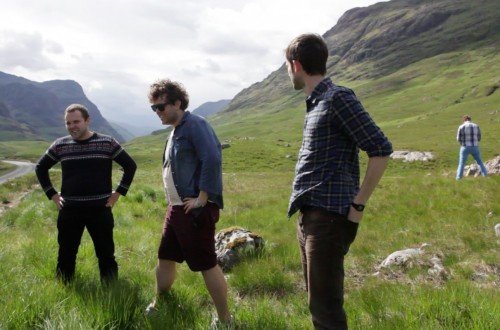 Check our Q&A with Flutes’ lead singer Godfrey McFall: Forming on the windswept coast of Fife, the eight year musical story of the four-piece features a church hall in Oxford, corporate espionage, recording in sheds and industrial estates, the M6, an old white minibus, far too many London gigs circa 2007/08, grizzly old men, a BBC sound technician with a fetish for vintage microphones, big belly laughs, and a Scottish football stadium.

Andy (bass, vocals & piano) and I played in a band called Big Weird Finger over a decade ago. The drummer in BWF now funnily enough drums in Broken Records.

Rob (guitar, not singing by choice) and I met over 8 years ago (I think, we’re old fellas now you see) and started playing acoustic shows under the name Oxford Economic Research…in…erhm…Oxford no less.

Fortuitously we ended up moving to London at the same time and all our dreams of forming a band and playing in Camden came true with a fresh-faced Alex Walker agreed to be our drummer.

Eight years on, over 100 gigs later and after output of one song per year, we’ve managed to release an album (with 8 songs on it).

There’s a real Scottish sound to your music but half of you are from England, how much does your environment influence your sound and lyrics?

Good research – I thought we’d convinced everyone we were the most Scottish band this side of Gretna?

I think your environment will influence you as much as you allow it to – we write a lot of our songs in a small room in West London that has no windows and plenty of shifty characters lurking around outside but that doesn’t mean we’re going to write a crunk album or the next Mardy Bum.

Many of the lyrics are written about particular moments and when we write melodies we tend to try and return to the moments I suppose. There’s no set formula though. That said Dolores is park in San Franciso and Kilburn is…

Your next single is ‘Kilburn’, what’s it like being a Scot in Kilburn, London – is there a good scene there?

…Only a wee bit about ‘Kilburn’ – in terms of being a Scot, it’s not something I think about much unless someone mimmicks my accent – then I tend to get upset and write loads of passive aggressive lyrics about how much I hate England.

Kilburn is a cracking place full of fascinating people and is always hinting towards its artistic side. There are a couple of great venues for live music (Powers and The Good Ship) plus a great wee theatre/cinema called The Tricycle Theatre. We’re playing our next show at The Good Ship and have already played an acoustic show at Powers this year.

The video for ‘Auld Archie’ is wonderful, featuring an old boxer. Can you tell us the story behind the track?

Would it be awful if i didn’t? Happy to tell you in person but writing it down makes it feel so clinical. Is that alright?

Your debut album ‘Flutes’ was released last year, what can we expect from you in 2013?

Our next single ‘Kilburn’ will be released on April 8th with a b-side cover of Haddaway’s 90s dance classic ‘What is Love’ – we’re finishing the mix now and it sounds suitably dark.

As I said above we’ll be playing a show on Friday 12th April at The Good Ship in Kilburn and are hoping to come to Glasgow and maybe St Andrews the following week but that’s not yet confirmed.

Later in the year we’re going to release an EP with some remixes, live tracks, a couple of new ones – we may even lose our minds and release it on a physical format.

It may be a misconception that bands that sound similar to Flutes are maybe a little serious but is that true of Flutes? Does your sound reflect your personalities?

Our one goal is for the sound engineer to hate us. If we can’t hear ourselves in the monitors, we know we’ve won again.

If you could bring back one band from extinction to collaborate or play live with, who would it be and why?

Television maybe – because Marquee Moon is one of the greatest albums ever.

Being from Scotland and England, recommend us a brilliant Scottish and English band we should check out at the moment…

Finally, tell us the oddest / funniest thing that’s happened to the band in your time playing and recording together?

After Kilburn, Flutes plan to release a limited edition EP with the working title Lost in The Sand. The EP will include lost demos, live recordings, remixes and at least one as yet unheard recording. It will be supported by a video by Glow Films as well as other live dates.