Spit Records presents a live recording by Belfast punk legends The Outcasts. This release also coincides with the recent reformation of the band with a view to playing 3 live dates in 2011. The 14 track CD, Vive Lyon! will be strictly limited to 1,000 copies. 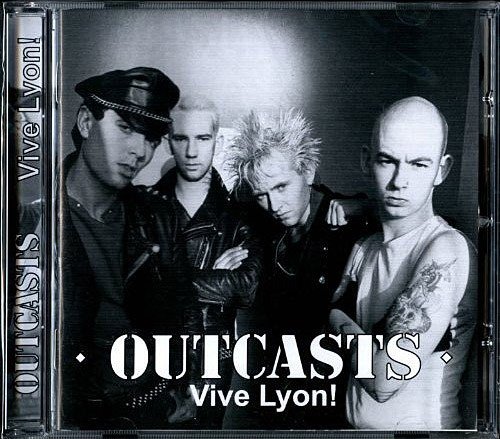 The N Ireland punk scene of the late 1970s had its own very distinctive sound. The bands from N. Ireland were much younger than their English counterparts and were totally devoid of pretence and trickery.

The stripped down to basics ethos of punk was evident in the “Belfast” sound. It was a mix of primitive and elemental rock ‘n’ roll mixed with strong melodies and good lyrics.

N. Ireland had been starved of touring live acts and had absolutely no music industry or infrastructure. As a consequence, punk arrived here later than the rest of the UK.During the darkest days of the Troubles, punk brought together kids from both religions to venues where the most important thing was that you were a punk, not which side of the political divide you were born into.

The aim of Spit Records, formed by Sean O’Neill, co author of the N. Ireland PuNk bible – It Makes You Want To Spit! – is simple, to celebrate this golden time in our social history by releasing as many previously unreleased late 70s, early 80s recordings by Northern Ireland’s PuNK and New Wave bands as practically possible.

Copies of the CD The Outcasts – 14 track CD, Vive Lyon! are available direct from www.spitrecords.co.uk or at one of the Outcasts gigs.

The Outcasts will be playing the Playhouse, Portrush on Friday 29th July – The Empire, Belfast on Saturday 30th July and the Rebellion Festival – Blackpool on Sunday 7th August.
SPIT RECORDS ON www.facebook.com