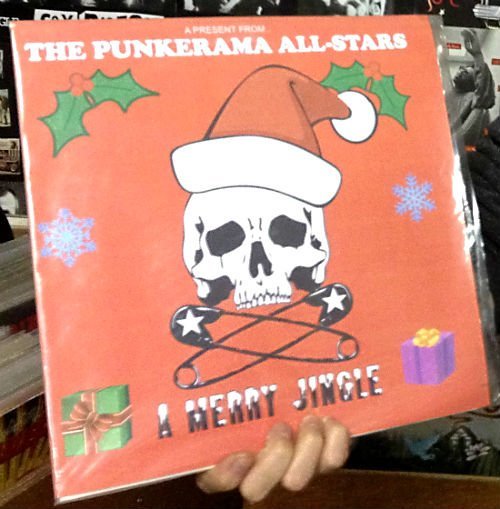 A WHOLE host of Irish and Northern Irish punk legends have banded together to release a Christmas charity single.

Over 30 musicians and singers took time out of their gigging schedule to record their part of punk classic A Merry Jingle. Also appearing on the single is Godfather of Punk and Good Vibrations record shop owner Terri Hooley.

The song, first released in 1979 by Thin Lizzy frontman Phil Lynott’s band The Greedies, originally stepped into the top 40 of the UK charts.

Now, over 30 years later, the iconic song that included other members of Thin Lizzy and Steve Jones and Paul Cook from The Sex Pistols is hoping to raise much needed cash for the Ulster Cancer Fund for Children.

The recording was the brain-child of local record label owner Gary Fahy of Punkerama Records.
Father of six, soon to be seven, Gary revealed: “I knew I wanted to do something for charity this year and it was a no brainer that it would be punk.

Over the last year I had been ill and I still am, I was diagnosed with haemocromotosis a condition that is created by an iron overload in the blood stream which can cause tiredness, arthritis and pain in the joints among other things.”

“I was sitting at home dwelling on my illness and playing with my youngest daughter Nina and realised how lucky I was. She was laughing and playing and I realised at that moment that I took things for granted. My wife, my kids and breathing.

“I realised that other parents aren’t as lucky as me and that’s when I thought it was time to do something.”

Once he had decided he was going to do something Gary set about getting the people he needed on board. He said: “I always liked about three or four Christmas songs by people like Wizzard, Slade, Bing Crosby and David Bowie…and The Greedies. But it was The Greedies song that kept going round my head for ages.

“Eventually I spoke to Buck Murdock from The Defects who owns a recording studio called Doghouse Studios in Lisburn and he said ‘go for it’.

“But I wasn’t sure if we could do it on time and I began to think we were going to have to plan it for next year. Then I got a call from Buck who said the Doghouse Ska band had recorded the music and we were ready to record.

“My first thought was that there wasn’t enough time but we got over 25 singers recorded in just 2 weeks.”

Buck, lead singer of the reformed punk band The Defects, said after everything Gary has done for the industry there was no way anyone would turn him down and with such a great charity behind it he was more than happy to get involved.

He added: “When it was decided to get all the punks together to do this single there was only one song worth recording. The Greedies were a band formed by Phil Lynott and he loved punk music. They recorded and released A Merry Jingle in 1979 at the height of the punk era and had other members of Thin Lizzy as well as Steve Jones and Paul Cook from The Sex Pistols guesting on the track.

“Getting people together wasn’t that hard, when they heard the single was for charity and that Punkerama were releasing it no one turned us down and before long I had a queue of people waiting to record at the studios.”

Terri Hooley, who also appears on the track, said it’s about time Northern Ireland had a good punk Christmas song.

“Northern Ireland has become synonymous with punk music over the years” he said, adding: “There has never been more of a resurgence than in the last five years with many of the best known punk bands of the punk era reforming and coming back even better than before. 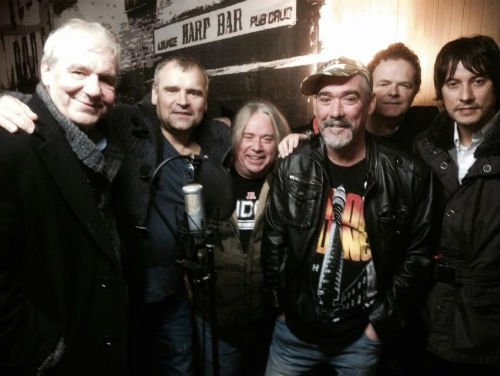 “This is a fantastic charity and a very worthy cause and it was great craic to get into the studio with a load of old mates and do something good.”

Paddy O’Doors and Ryan Singleton from new era punk band Buck Eejit said they were proud to be on the same track as so many great punk singers and musicians.

Paddy said: “Taking part in the charity single was a worthwhile and welcome break from the usual drunken stupidity that we are known for.

“I hope it’s the soundtrack to many Christmas dinners for years to come.”

Ryan added: “It was an honour to be asked to sing on a single that has the best of Irish and Northern Irish punk…and Buck Eejit. All for a worthy cause too.”

John Rossi, a well known musician who plays for a number of bands including punk band Shock Treatment 21, said his band definitely didn’t need to be asked twice to participate.

He said: “The Ulster Cancer Fund for Children in a meaningful cause. This truly is a wonderful Christmas song played by legends the first time round and to be given the opportunity to take part this time round was an honour.”

1000 copies of the CD single were pressed and already sales have been going well with an online community already starting to photograph themselves with their copy.

At just £3 per single with all profits going to the charity, copies are available from Dragon Records in Wellington Place, Punkerama.com and from Good Vibrations Record Shop in North Street among others. Gary said he’s been very pleased with sales and pre-orders already in just a matter of days.

He added: “I am so proud of all the musicians and singers who were able to give up their time at such notice. Old punk bands and new from this wonderful little part of the world.

Many of them my heroes from when I was young – it was all of these factors made it even more special to me and the fact my daughter Jaime who is also a singer/songwriter was able to perform on it and they even managed a line or two out of me.”