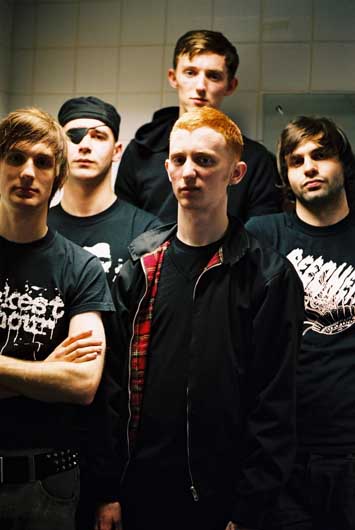 Gallows are the most exciting band to emerge from the UK punk/hardcore scene in years. Formed in the conurbation town of Watford in early 2005, the quintetâ€™s members cut their teeth playing in various lauded local punk/hardcore bands.

Inspired by the early 80s hardcore scene (Minor Threat, Black Flag), 90s Swedish hardcore bands such as Refused, the metal riffs of Mastodon and the discordance of key underground bands such as Swing Kids, and JR Ewing, Gallowsâ€™ premier goal was to wrestle punk back from the fashion police and re-invest it with passion, brutality and menace.

They did this by writing a set of songs that had little to do with haircuts or singing love songs in American accents and everything to do confrontation, violence and the seething, simmering anxieties of life in an archetypal dead-end English town.

During these early days, the band were writing and rehearsing in Slough, where singer Frank Carter was working. Their time spent there (home of â€˜The Officeâ€™, lest we forget) merely increased the rising bile and informed Carterâ€™s confrontational lyrics that unflinchingly tackle topics such as hometown violence, date rape and the effects of divorce upon Carter and his guitarist brother Steph.

Here â€“ finally â€“ is a band that imbues English punk with the same social commentary as The Clash or The Specials. Though this time it is under a Labour government and out in the wider world different wars are being fought, Gallows remind us that in the concrete-paved streets and graffiti-strewn underpasses of the provinces, little has changed: â€œBlack knuckles and broken teeth / Grey days and grey streets,â€ they sing like a battered Betjeman on â€˜Come Friendly Bombsâ€™. â€œThe same faces, the same release / If this town had a name it would be defeatâ€¦â€

Out playing hardcore bills across the country in 2005 and early 2006 (all the while travelling in a dilapidated old Royal Mail van thatâ€™s still in use today), Gallows quickly earned a reputation within their scene for their explosive shows. As guitars swing and flay around him, Frank proved an imposing presence. As one Kerrang! live review noted: â€œBeers fly, bodies hit the deck and sinewy, shirtless singer Frank Carter â€“ about five-foot-eight in his stockings – proves to be the scariest pitbull presence since Tim Rothâ€™s skinhead character in â€˜Made In Britainâ€™â€. After one such show Frankâ€™s doctor diagnosed him as having a whiplash-induced neck injury, asking â€œHow fast were you travelling when you crashed â€“ fifty miles an hour?â€

A turning point occurred at hometown show in Watford in early 2006 when a local gang (socially defined as â€˜nasty little fuckersâ€™) kicked their way into the venue two songs in. On Frankâ€™s command the young hardcore fans turned on their tormentors â€“ the same small-minded people who give them grief for their musical beliefs on a daily basis â€“ and the clash ended in the hospitalisation of the gatecrashers. â€œI got a lot of shit from people like that when I was kid,â€ says Frank. â€œI was an easy victim. But now itâ€™s a completely different ball gameâ€¦â€

Because this is what Gallows are about. Camaraderie, self-preservation, freedom, fighting back, release â€“ and escape from the drudgery. These are the five put upon kids who have decided to fight back against their cultureless social peers and the systems aimed to keep them there.

The band signed to Nottinghamâ€™s In At The Deep Records and recorded their debut album â€˜Orchestra Of Wolvesâ€™ in a bedroom on zero budget. Released in September 2006 this fraught collection snow-balled as word on the record spread through the underground and into the national press and radio. Itâ€™s already fast becoming a classic and should be staple listening for any upcoming politician as the true sound of young, disenfranchised Britain at the dawn of third millennium.

By the close of 2006 the work had paid off. Gallows were the most talked about band of the UK underground, a reputation signed sealed by a series of killer gigs ranging from small local shows (including a memorable Halloween show menacingly dressed in full A Clockwork Orange droog outfits) to supports with bands such as MC5 and Papa Roach and on to arena shows with Bullet From My Valentine â€“ where they stuck out like a sore middle finger, simultaneously loved and hated; see, with Gallows, impartiality is not an optionâ€¦

Accolades followed from the likes of NME, Kerrang! Rock Sound and Metal Hammer and much airplay from the Radio 1 Rock Show and Punk Show and the XFM Rock Show. As a DIY hardcore band, it was an interesting juxtaposition. But with their feet in the underground and their eyes looking towards bigger things Gallows proved themselves more than ready to make that leap. Others agreed and in January 2007 they became the smallest UK band to grace the cover of Kerrang! in many years.

Still technically unsigned but the subject of much international label interest, in March 2007 these five men from the English suburbs hit the US for the first time for an appearance at South By South West, tour the UK again, then return Stateside for a mammoth, forty-date two-month stint on the entire Warped tour (alongside Bad Religion, Pennywise, Coheed & Cambria) â€“ another rarity for a UK band.

Punk rock just came home then. And the way it stands today, the world is Gallowsâ€™ for the taking.
www.myspace.com/gallows

Tickets for all shows on sale now from Katy Dalyâ€™s, Virgin & all usual Ticketmaster outlets.