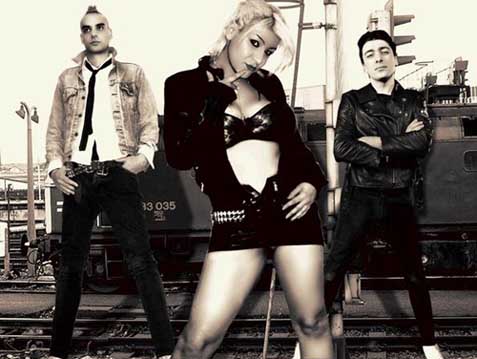 Â Punk Rockers The Duel continue to spread the word of their music and are now embarking on a tour of the UK to promote their second LP â€˜Childish Behaviourâ€™, to be released on 20th of April.

The Duel is a London based five piece high energy rock band featuring: Tara Rez on vocals, Andy Thierum on keyboards/bass, Dave Renegade & Phil Allen on guitars & Pumpy on drums. Their raw talent and charisma on stage reminds of the biggest Punk bands of the late 70â€™s.

Following the success of their debut album â€˜Letâ€™s Finish What We Startedâ€™, they are back to delight us with a new offering â€˜Childish Behaviourâ€™ to be released on 20th of April 2009. The brand new double album features a bonus CD, with various acoustic tracks and extras. â€˜Childish Behaviourâ€™ cries out with energy, impelling lyrics, driven riffs, top notch keyboards and a leading vocalist, Tara Rez, who has been likened to many female icons of our time.

The band completed gigs in UK, USA Germany & Holland to promote â€˜Letâ€™s Finish What We Startedâ€™ but will remain mainly in the UK for the first part of this tour. See as Listed below