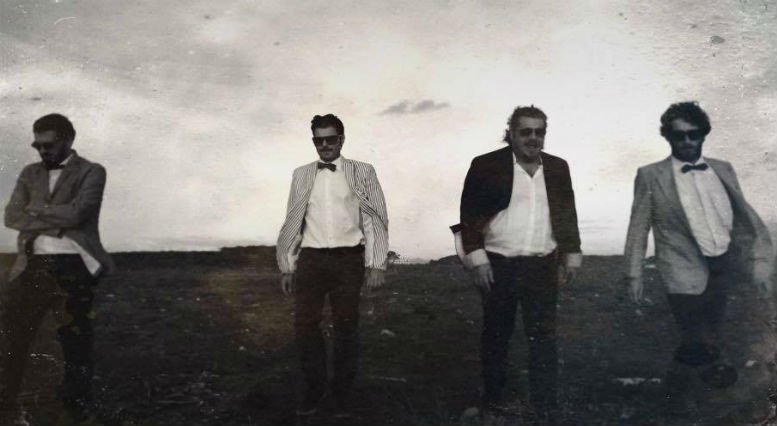 First up, can you tell us why did you call the band ‘Psychopathic Romantics’, is there any strange / interesting story behind it?

Of course. When Vincenzo Tancredi and me (‘Dust’), Psychopathic Romantics founders, were looking for gigs in Rome, ten years ago, after going to all the clubs and hearing the same annoyed words coming
out of the music directors’ mouths “What genre do you play?”, by the 10th time of hearing these words we began to respond “We play psychedelic romantic rock”, just to be wise asses! We soon substituted ‘psychedelic’ with ‘psychopathic’ because it also reflected our characters. In a few months Augusto De Cesare and Filippo Santoiemma jr. (both students in Naples and Caserta) joined the project and the band was complete.

Can you talk about your album ‘Bread and Circuses’?

“Bread and Circuses” is an ancient Latin expression that describes how governments maintain power. It works fine nowadays, too: after all the austerity measures that the Italian government has inflicted upon its population, it’s easy to notice that with a football game, or any other distraction, everyone forgets what the government is doing to the lower classes. I thought it was a good concept to write about. Of course the album does not speak of these heavy concepts all the time, we also write about…politics!

The album was digitally released on April 28th 2015, for Freakhouse Records. It’s made up of 13 tracks, including three live tracks. At this moment, it’s only available in digital version (but we’re going to produce soon some physical copies, maybe vynil or limited editions), so if you’d like to listen to our propaganda…sorry, to our music, you have to visit our label’s bandcamp page, where you can stream and download for free the whole album.

We have a studio – where maybe we spend too much time, way too much time – and I usually bring there the songs I’ve written (vocals and guitar) and the whole band jumps in. We like to play the new songs out live to see how they swim. After they pass the live test, they get recorded and later eventually included on an album, if they are lucky.

I was strongly influenced by my long living in the US, so my writing owes much to some Anglo-American culture and music, but the band as a whole has a variety of musical influences. We go from
classical to folk, punk to blues, reggae to old traditional Italian music and post-rock.

The most difficult thing about the music industry is to find venues to play. In order to play more, we transformed and reduced our live set – which contained before big amplifiers, electric guitars and full drum set for concert halls – into 1/2 drum set (only bass drum and hi-hat), tambourines, bouzouki, mandolin, harmonium and an acoustic guitar. With this live set we can play anywhere, from the street to the reception area at the Hilton (LOL!).

The last show we played was in Naples, Italy. We were part of the line-up of BulbArt Festival. It was held in an amphitheater inside a park called ‘Parco dei Camaldoli’, overlooking the gulf of Naples. It was nice and pleasant.

Debts! No, I was only kidding! We are usually very concentrated on stage due to our experience playing all sort of venues , from very small to large stages.

We will play at Giffoni Film Festival, near Salerno, Italy on july 24th 2015. It’s a great honor for us to play there, because of its international renown. There will be great music and international film stars from Harry Potter, Lord of the Rings and others, and we’ll try to make the most of our time on stage.

We’re on tour promoting “ Bread and Circuses” right now, and we’ll be up to this year-end at least. We’ll try to plan some gigs outside Italy, too. After that, we will return to the studio and record some new stuff.