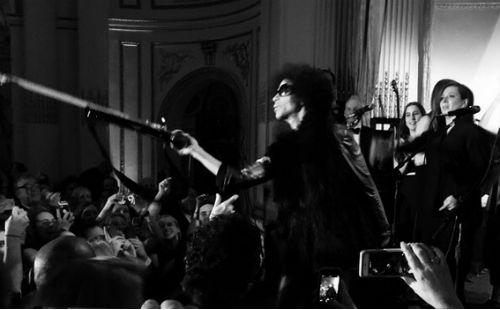 Prince and 3RDEYEGIRL and Jimmy Fallon bring the hiuse down at the at SNL40 afterparty in New York City. The band -Donna Grantis (guitar), Hannah Ford Welton (drums) and Ida Nielsen (bass) – and the funk-rock genius were not scheduled to perform but found themselves on stage when the A-List crowd in attendance, including Beyoncé, JayZ, Leonardo DiCaprio, Justin Timberlake, George Lucas and Taylor Swift, started to chant their names before parting to create a path for Prince and 3RDEYEGIRL to take to the stage. They performed the super tune ‘Lets Go Crazy’.

Prince + @jimmyfallon #snl40 After party bringing the house down!

Changing the iconic lyrics of the song, Prince address the crowd as ‘Dearly Inebriated’ as celebrities including HAIM and Jimmy Fallon joined in on stage with the classic…