Primal Scream have announced that they will be playing Belfast on 16th November in St Georges Market. The band, fronted by Boby Gillespi last played Belfast at Vital â€˜02. Primal Scream played the Limelight on 22nd August 1997.
â€™BEAUTIFUL FUTUREâ€™ is Primal Screamâ€™s ninth studio album and their first for B-Unique. The bulk of the album was produced by BjÃ¶rn Yttling [Peter, BjÃ¶rn and John] and Paul Epworth (Bloc Party) including the incredible first single â€˜Canâ€™t Go Backâ€™. 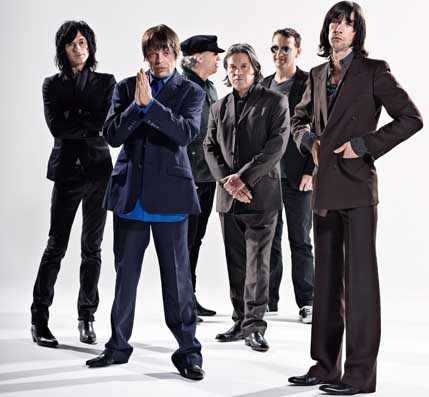 The album features guest collaborations from Lovefoxx of CSS, Josh Homme from Queens Of the Stone Age and folk legend Linda Thompson. As you would expect from one of Britainâ€™s most exciting and inventive bands â€˜BEAUTIFUL FUTUREâ€™ displays a heady mix of genre crunching taking in Philly soul, dark electro, accelerated rock’n’roll riffs and pure British pop Â­ all given that particular Scream edge.

â€œIf you hear this new record of ours from start to finish,â€ explains Bobby Gillespie, â€and you hear all the different sounds and styles and moods, atmospheres and instrumentation that we use, itâ€™s different from the last record and different from the record before that. You know, thereâ€™s not one set Primal Scream song where itâ€™s verse-bridge-chorus-middle-eight. But this album is more like a pop record, more like classic songwriting.â€

Highlights include the single â€˜Can’t Go Backâ€™, which is the kind of high energy rock’n’roll the band excel at, all kinetic drum beats and scuzzy guitar riffs, everything moving at methamphetamine rate.