‘Switchboard Operator’ is the first single lifted from their album ‘My Own Company’, released 4th April via PRODUCT.

Hi POLSKY how are you?

Where does the band name POLSKY come from?

I saw it in a shop window in Deptford. A misspell of polish in polish. I liked the lost in translation element and thought that it would be a good name to use for a
fictional state/corporation to release all our music through.

You describe POLSKY as a ‘musical corporate entity for the modern day’. Can you elaborate on this a little?

It’s partly a reaction to the “pay to play” culture that still exists for bands. We also saw it as a satirical position in reclaiming the bandwidth occupied by the onslaught of the corporate world – both politically and musically. In effect we saw the phrase as an attempt to fight fire with fire!

What are the themes you confront on your forthcoming album ‘My Own Company’?

The writing process began at the start of the financial crash of 2008. What emerged was a collection of experiences that translated into the songs: social media anxiety, debt, binge drinking, video game addiction and unemployed cloud watching! 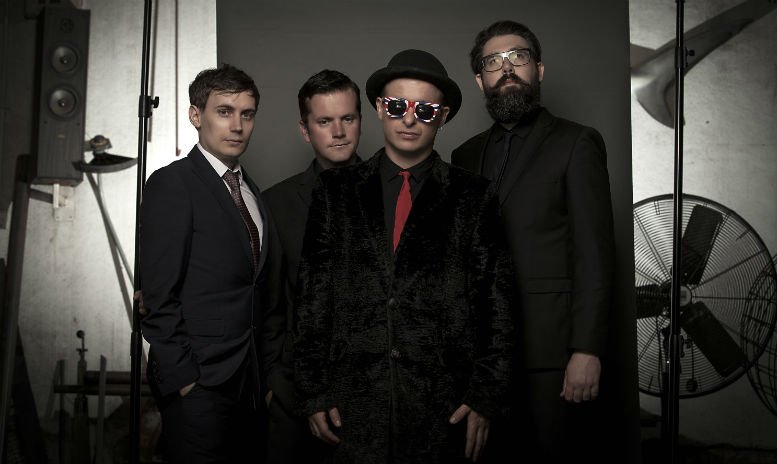 How do you go about the writing process both musically and lyrically?

There is definitely a magpie element with collecting shiny things from various sources: recycled data, clues and hints found in random media. Sometimes if you apply pressure on point A it comes out at point X a week later in another form, often presenting a different element for the track. A bit like musical reflexology!

Where would you say your sound fits in today’s musical landscape?

The music we make is definitely pop. It has been created to appeal to everyone initially. Obviously it would be naïve and incredibly arrogant to suggest that everyone will like it but if you like to dance and have any social or professional insecurities, there’s something in POLSKY for you.

The other members of POLSKY are officially named on the Executive Board of POLSKY Corporation. What challenges did they have to overcome to achieve such a lofty position?

They all completed tasks successfully as a team in a crystal maze simulation at POLSKY HQ. We found out very quickly who we would nominate for the mental challenges and who was a dead cert for a skill game.

For those who haven’t seen you play live, what is a POLSKY live show like?

Frenetic, fun, danceable! We’re the corporation that gives back.

We release the first single off the “My Own Company” record on the 5th of February called “Switchboard Operator” with an insane video being made by Simon Green.

The album will follow in April with a UK and European tour, we hope to see you at a show soon.