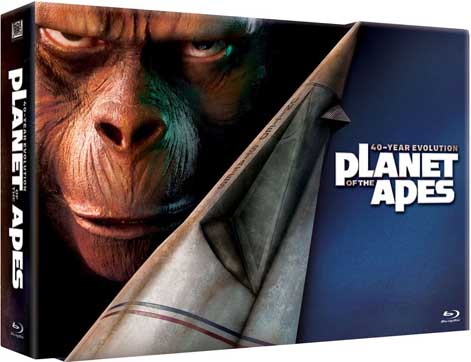 From an age of film when science fiction served as allegory in addition to providing thrilling spectacle and edge-of-your-seat adventure, the Planet Of The Apes franchise set the gold standard for sci-fi films.Â  Now the films that changed the face of science fiction forever will be available in the ultimate home viewing format.
Planet Of The Apes: 40 Year Evolution Blu-ray Collection is packed with exclusive new High-Def content.
And as a special treat for Apes fans, the collection includes an unrated version of Conquest of the Planet of the Apes.Â  Previously unreleased in the United States, this version includes eight minutes of unrated footage.
Other new special content includes an â€œEvolution of the Apesâ€ documentary chronicling the evolution of the Apes universe from novel to the big screen, an â€œImpact of the Apesâ€ featurette exploring the cultural impact of the franchise and a never-before-seen public service announcement from ANSA about the seminal flight of the â€œProject Libertyâ€ crew. Each Planet Of The Apes sequel included in the beautifully packaged collection will contain brand new High-Def â€˜making-ofâ€™ featurettes.
The compelling and classic 1968 Planet Of The Apes stars Oscar-winner Charlton Heston as an astronaut who crash lands on a planet ruled by apes who use a primitive race of humans for experimentation and sport.
Beneath The Planet Of The Apes tells the story of a daring rescue mission that leads to a subterranean city where mutant humans worship a weapon capable of destroying the entire planet.
In Escape From The Planet Of The Apes, two futuristic simians who have travelled to present-day Earth enjoy celebrity statusâ€”until a government plot forces them to run for their lives.
In Conquest Of The Planet Of The Apes, apes have been domesticated and trained as pets and personal servantsâ€”until their continual mistreatment leads to a spectacular revolt.
In the final Apes chapter, Battle For The Planet Of The Apes, an idyllic society of man and ape is threatened by both a militant gorilla and a tribe of still-intelligent mutant humans.
Planet Of The Apes: 40 Year Evolution Blu-ray Collection is available from December 1, 2008.