Best known as the hilarious and sometimes outrageous Jake Stevens from RTEâ€™s Naked Camera, and now Makinâ€™ Jake, PJ Gallagher is back again in Vicar St. with his brand new stand up show at Vicar Street on November 14th. For the past few years PJ has been wowing crowds all over Ireland and currently on release his first ever live DVD, filmed over 2 nights at a Vicar Street in 2007 – â€œLive! Take After Yourself And Be Smileâ€.(If you want to know what the title means, watch the DVD!). PJ rips through his hilarious live set with his customary manic energy including guest appearances from his good friend Jake Stevens who currently has a new show on RTE 2 â€œMaking Jake Stevensâ€. 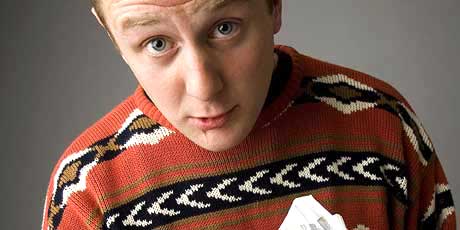 His numerous TV appearances include The Tubridy Show, Podge and Rodge, The Miriam Oâ€™Callaghan show and 1 to remember with Brian Kennedy.PJ Gallagher Live @ Vicar St. Nov 14th.
Tickets are â‚¬28.00 on sale Friday Aug. 8th @ 9am through