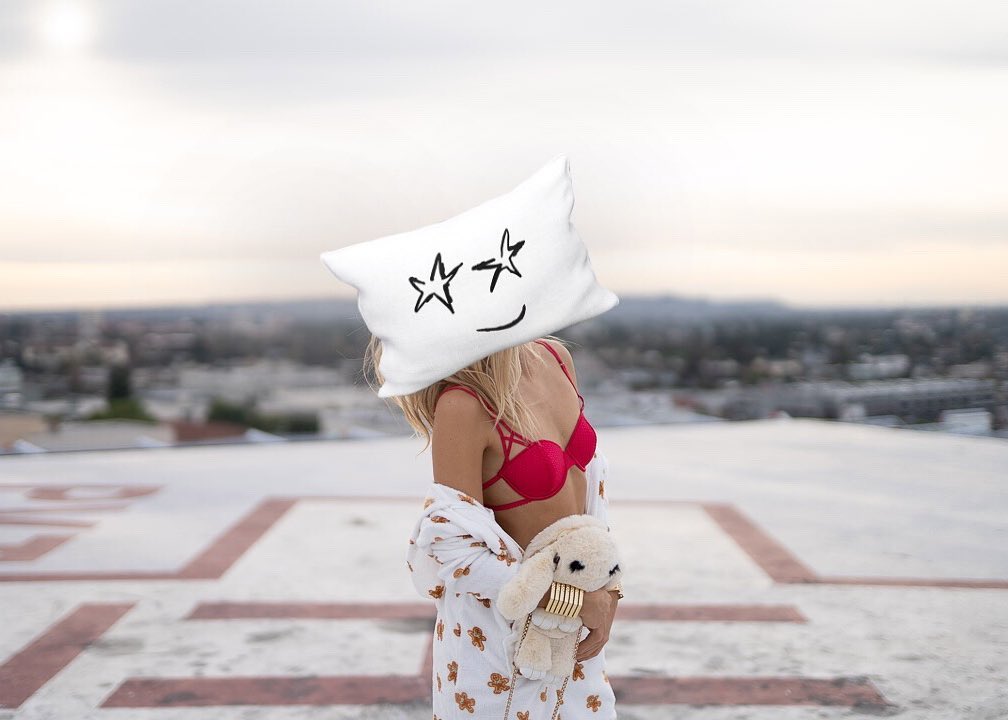 LA based artist Pillows is currently basking in the afterglow of newest single Pillows, which is a gorgeous introduction to her style if you’re unfamiliar with it. We got speaking to her about the track and what inspires her to write music.

I started writing music when I was 16. I was in a pop/rock band and we were playing a bunch of shows locally. That’s how I got the attention of some A&R’s and DJs who wanted to collaborate with me and wanted me to write for them. So I started writing for a lot of people besides me and within a year or so music became a full time thing for me. Not much later I got signed to Warner Music and wrote my first electronic/dance song called “Hear The Sun,” that went No1.

It’s funny enough because my best ideas come to me when I am just doing something casual like shopping for food or driving to the gym. I hear a song in the radio or on Spotify that I have never heard before and I come up with my own, new top-line for it –sort of like “what would I write to this if this was my beat” type of thing. So basically most of my voice notes in my phone are me humming some muffled melody with a bunch of background noise from Target or Trader Joe’s. Ha.

The topics that I choose for my lyrics are all based on my personal experiences. My start in America was quite rocky – I went thought some really thought situations that are actually helping me now a lot now because I almost never have a writer’s block.

I grew up in Hungary, in Budapest. I was listening to a lot of POP and R’n’b when I was 6-12 (Justin Timberlake, Timbaland, Nelly Furtado, Shakira). Then I was really big on Sum41, System of a Down, Green Day and some other rock stuff for a few years. And then GTA San Andreas came out and I started listening to KISS FM or whichever radio station that was playing in the car that I hi-jacked in the game. So I got exposed to a lot of old-school rap, hiphop and some Latin music as well. That’s probably why my music has elements from a lot of different genres.

We’re fully into “Pillows” right now. Can you tell us a little bit about the making of it?

I always wanted to do something that will stand out and differentiate me from everyone else. I think that as a female you have to work a lot harder to prove yourself in the dance music circuit, especially if you are not from LA and English is not your first language. But I knew what I am signing up for and I was up for the challenge.

The Pillows name came from a personal experience of mine. At my first year in LA I was struggling a lot because I didn’t have a lot of friends here in the US, I was far away from my parents and my home, and I didn’t have a lot of money to support myself but I needed to stay here because I was attending UCLA. So I was couch-surfing a lot. And despite all the hardship, I noticed that at the end of the day when I go to bed and put my head down onto my pillows, all of the sudden everything feels much better and things doesn’t look so dark and crazy after all. So I started to see this as something very empowering and I decided to use this in as my new name, Pillows. And having a onesie as a signature outfit felt like the right idea for a very cool and distinctive image which is also really comfortable.

The reason why I am covering my face with the Pillows logo is because I don’t want people to judge the music based on my face. I want this to be about the music not anything else, so I will keep it like this for a while and reveal my face later.

It’s pop/house. Very uplifting and hopeful but energetic and fun at the same time. I wanted my tracks to be heavy enough for a pool party but not too much for my mom – haha.

I’m based in LA. I will be travelling a lot this year because I have shows in Las Vegas, San Diego, and Europe this year.

What have been your 2019 highlights so far?

I think my first track “Ghosts,” which got an enormous support on Spotify and that kinda set the tone for the project.

What do you most want to achieve as an artist?

I would like to tour and plays as many shows as possible across the globe to connect with people who come from different places and backgrounds but all there together for the same exact reason – the music.