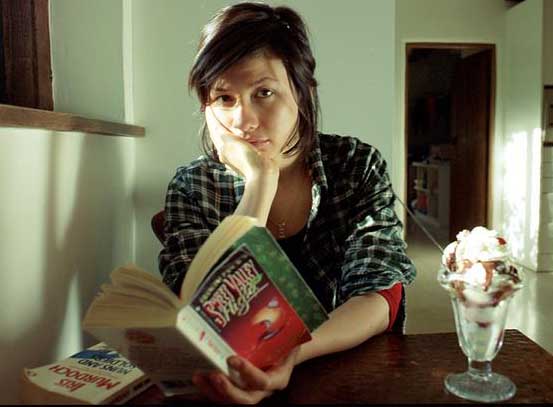 EMMY THE GREAT comes to Belfast for the first time on Wednesday 4th March 2009 to play the Limelight.

She is currently on itunes pick of 2009 list and many great things are expected of singer songwriter Emma Lee-Moss in the coming year. Savage observations and stark admissions, cloaked in arrangements of disarming simplicity, First Love is the debut album from Emmy The Great, set for release on 2nd February on Close Harbour. 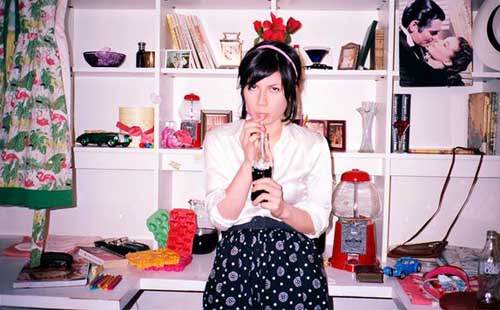 These are the abstracted tales of protagonists drawn in an imagined, yet all too real world. A stage set behind the net curtains and garden gates of our own; a skewed vision of the Home Counties, Radio 4, romanticised War time novels and Evelyn Waugh, sound tracked by Noel Coward and Sunday school choirs. Like black clouds over a picnic, We Are Safe wonders how the world has the temerity to continue after personal catastrophe. We Almost Had A Baby reveals how close, messy relationships can come to unplanned permanence and MIA asks which song would be appropriate to hum during a car crash?

“I like to romanticise the English countrysideâ€¦.” says Emmy. “But i also notice that everything in nature is always having sex and dropping dead.” The deliberate, rooted prettiness of Emmy’s songs are undercut by some brutally candid lyrics that could float by unnoticed on first listen. “Our guitarist Euan says our songs are passive aggressive people think we’re harmless unless they’re really listening.”

Emmy The Great may not be a new name to some, for singer songwriter Emma Lee-Moss has been reducing rowdy crowds to an awed silence for some time, releasing her debut single in April 2006. That a debut album arrives now, is testament Emmy’s steadfast refusal to dilute or dumb-down her sometimes uncomfortably personal vision, in favour of easy packaging.

Perhaps her admirable stubbornness stems from growing up as the only Western kid in a Chinese school in Hong Kong; taking the train to Tower Records to buy up the only non-Chinese music they had – Weezer, Smashing Pumpkins and The Lemonheads. An outsider’s resilience that would help see off the conformist overtures of label bosses and managers, proposed collaborations with hit-factory songwriters, and insightful appeals to ‘put a few more choruses in’.

These chastening lessons at the hands of industry, would push Emmy’s true idols into sharp focus, “I ended up really depressed and confused and almost tried to quit. Then I looked at Diane Cluck and The Mountain Goats, and I realised that all the stuff I’d been told about fitting into slots must be rubbish, and I remembered that a lot of my favourite artists had had to strike out on their own.” Further bouyed by the sell out success of the self released ‘My Bad’ EP in August 2007, her album arrives self-funded, self-produced and self-released. It is Emmy’s answer to the pigeon-holers and industry insiders who would have her painted differently.

Initially, Emmy started out playing solo acoustic shows, being invited to tour with the likes of Martha Wainwright, Bright Eyes and Tilly and The Wall, but since the release of the single ‘Gabriel’ in November 2007, Emmy The Great has developed from solo venture to full collaborative ensemble. Now a band formed around a core of Emmy, guitarist Euan Hinshelwood , and pianist Tom Rogerson. “Emmy The Great is now a project that we all contribute to. The three of us come together as equals.” Filled with this fresh confidence, Emmy decided she had to make an album immediately, “Otherwise I was going to explode and kill everyone.”

Banishing past industry faults and follies, the band set about recording at The Earlies’ studio in rural Lancashire. “It seemed the right place to go. This little room in the middle of nowhere, with borrowed equipment and no lightbulbs, was the perfect antithesis to all my previous bad experiences with producers. The Earlies were really relaxed and let us do anything we wanted.”

This easy-going isolation came at a price, however. “We showed up at what was supposed to be a B&B in the middle of pouring rain and found out it was a barn. They had five gym mats to sleep on and the kitchen facilities were a room with a bunsen burner. On the day our drummer drove up from London for his drum takes, the desk broke. When it was ‘fixed’, we found out that the local guy who came to mend it had used ‘meditation’. Needless to say it kept breaking and we spent a lot of our recording time huddled around Garageband in the farm we were staying on, trying not to scare the chickens with our noise, and also trying not to accidentally record the chickens.”