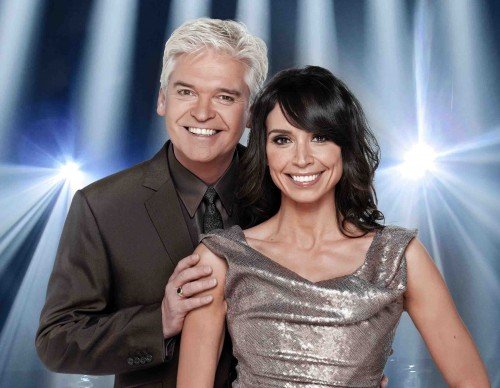 Phillip Schofield is back on our screens this Sunday with Dancing On Ice.

He revealed to TV Buzz Magazine from The SUN, why Holly Willoughby won’t be joining him; “Holly and I are looked after by the same management, so I knew a while ago that we were getting into a problem with dates if she did The Voice.”

Phillip explained, “There’s no question that Holly’s gutted she can’t do Dancing On Ice, but she got a gig she couldn’t possibly refuse. If I was her I would have done the same thing.”

But the question is, will Christine be able to fill Holly’s heels – or her Sunday-night wardrobe, “I’m sure that’s a tradition that will be continued, there will be no shortage of va-va-voom with Christine.”

Phillip revealed his opinion towards his new co-host being booted from Daybreak, “I think Adrian and Christine gave it their best shot, you just have to pick yourself up, dust yourself down and move on.”

Phillip also talks about the replacement of Emma Bunton and Jason Gardener on the judging panel; “When it comes to Jason, if I’m completely honest you just shake your head and tut in disbelief. But then you say: ‘That was bloody great telly.’ As far as I’m concerned, Jason was fantastic.” Though Phillip has eyed up new judge Katarina Witt, “I have goggled her Playboy pics…good lord, that’s a turn up for the books!” On new judge Louie Spence; “How long will it be before he does the splits on top of the desk?” Now that would be great TV!

Phillip revealed to TV buzz, “Let me promise you that the mere fact that it’s on ice doesn’t mean that it’s not hot.” There was even a rumour that Mr Beckham himself was going to appear on the show, “Well he needs to get his form in earlier; David always leaves it a bit late.” Joked Philip.

He maybe truing 50 but still gets a fair few compliments, “Someone said to me the other day: ‘How much does it cost to get your hair that colour?'”

One thing that does keep him young at heart is his twitter fanaticism, “She [Steph, Phillip’s wife] used to look at me tweeting and ask: ‘What are saying now?’ I think she must have thought I was having an affair because I was always on my phone.”

He confessed, “So I said: ‘Right, that’s it’ and signed her up with an account! Now she is perfectly happy when she sees me pick up my phone because she knows it’s Twitter and not a mistress, although of course Twitter is a mistress.”

He may have one million followers but there is one person that won’t follow him, “The queen is terribly modern, but you can’t get a follow off Buckingham Palace’s very own – I know because I tried.” It was worth the try!
Read more in TV Buzz Magazine from The SUN
facebook.com/TVbuzzmag
#SchofeinTVbuzz