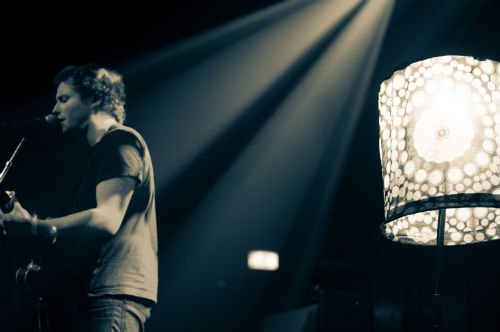 His third offering, produced by Wetle Holte (Eivind Aarset, Anja Garbarek, Wibutee) and mixed by Christer A. Cederberg (Anathema, Maria Mena), reveals a slight change of course, containing more rhythmical and electronic elements but it’s the strength of Petter’s voice that captivates the listener. Check out ‘Tiger’ + ‘Never Leave Me’…


Hello Petter, please introduce yourself, who are you, where are you from and what do you do?

Hello Hello! I am a guy from Alta in the north of Norway. I play guitar and sing. I write songs, and usually I play them live with Wetle Holte aka The Lonely Drummer Orchestra. My music is atmospheric and often melancholic. I think it’s pop music. A bit alternative.

I also play in a band called Pil & Bue.

Tell us about your forthcoming album ‘Sirens’?

It’s a new direction in my music, a bit different from my previous releases. This album contains more rhythmical elements and electronic elements. The sound is a bit less pop. I feel at home in this sound.

How did you get involved with Function records?

My dutch booking agent Adriaan Muts knew Function Records as they both worked with Maybeshewill for a while, and he introduced us to each other. Since then we have worked together. FR also released my previous album ‘Clocks Don’t Count’.

What’s the best thing about being a musician from Norway?

I don’t know. Probably that the state funds a lot of artists here.

Tell us about the Norwegian music scene – any recommendations we should look out for?

A lot of good acts in Norway at the moment. Eivind Aarset, Cold Mailman, Susanne Sundfør, Shaun Bartlett, High as a Kite, Kvelertak, Atlanter, Holte, Bendik, Emilie Nicolas… I was listening more to music before I started making music myself. Unfortunately. I miss being a teenager in that way. When discovering new music was more magical. Well, thats not entirely true but you know what I mean.

Are there any plans to come over to the UK to play some live shows?

Yes, but no dates confirmed yet. That annoys me. Wish I could give you a long list of dates. I like to play. I have a duo live set-up now with The Lonely Drummer Orchestra (Wetle Holte) that I love doing.

For those who’ve not heard you before, which song would you say is a good place to start?

‘Sirens’ I think. It sums up my last album, and where I am right now. It reflects the way up to here from the start, not the end as I intend to make some more music. When the album is dead (the formate) I’m going to celebrate that with releasing a new album.

Finally, if you could collaborate with any artist dead or alive, who would it be and why?