Songs can be like public transportation for all. They take us places. But some suddenly run off well worn rails, heading for an unexpected adventure. This is what happened with â€œGoing to Where the Tea Trees Areâ€, a charming single recorded by a little known Swede, Peter von Poehl. 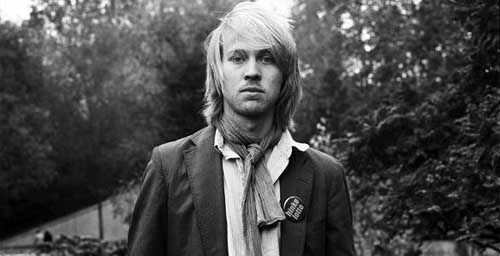 A cosy song which sounds like it was recorded in an igloo, it began to get play on French radio last year. Sudden developments followed; listeners bombarded the radio switchboard for information; an influential L.A. producer being the next to succumb; then sales flowing through Peter’s website. Word of mouth and blog to blog, a persistent and affectionate rumour about the single evolved into something of a contemporary French legend.

Today, now that this semi-famous song has given its name to Peter von Poehl’s debut album; now that its infectious charm is about to increase his rapidly-growing fanbase; now, then, it’s time to know more about this intriguing gentleman, Swedish by his mother and German by his father. Recorded partially in the Swedish countryside and in Peterâ€™s Berlin apartment, â€œGoing to whereâ€¦â€ shows no signs of the shiny shell or overblown workings of many pop productions. Instead, the music took advantage of the basic surroundings it was recorded in to emerge as a lively, vibrant recording, loaded with inspiration.

Between folk ballads and pocket symphonies basking in boreal luminosity, the 12 songs form an album throbbing with so many shapes and colours, several listens are necessary to grasp its full effect. A continually surprising record, yet thanks to Peter’s milky voice, quickly familiar. Unashamedly contemplative on â€œGoing to Where the Tea Trees areâ€; playful and dancing on â€œGlobal Conspiracyâ€; mesmerising on the magnificent â€œStory of the Impossibleâ€ and meditative on â€œTooth Fairyâ€, Peter gives us as many faces as musical facets, without ever giving the impression of being stretched too thin, too widely. There’s a reason for this, because behind the fragmented prism of these first offerings, there’s a vague unity to all the songs. Threaded through everything is that troubling notion of being a foreigner in your country and feeling adrift in your own home, as if you could be anywhere. But this modern troubadour, new wave folk singer of ingenious and moving songs isn’t going anywhere. Peter von Poehl will be with us for a long while to come.

Peter recently supported Brian Wilson at his one-off Paris show. Air are also huge fans, taking Peter with them as the main support on their recent world tourâ€¦