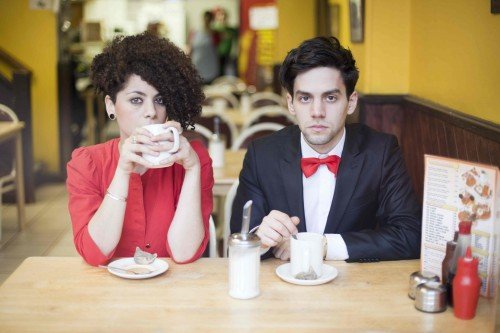 Indie music duo Peter and Kerry are the band on the tips of many tongues of the industry’s movers and shakers. The pair never failing to create a stir with their live performances and building up a very impressive fan base whilst doing so.

Fame was fortunate enough to catch up with them to discuss their success, their debur album release and what makes them make the music they do.

So how did Peter and Kerry form as a duo?

P&K – We were both solo artists on Tape Club, and after a year or so of awkward conversation, we became close friends in summer 2010.

We were probably getting on our label manager’s nerves so we decided to go and do some recording together in Peter’s Dad’s house in Southampton. Then we came back to London a few days later with an EP and a new band called Peter & Kerry.

Did you have the same musical influences?

P – Some, but not really.
K – Not really, unless it’s 80’s music,
P – That is very true – I seem to remember that Peter & Kerry originally started as an idea to do a Youtube channel of 80’s music covers.

How do you begin the creative process of writing your music?

K – Get drunk.
P – Get drunk.
K – It depends. As an example, we have one track on the album which started as a cover of a Laurel Collective song in rehearsal.
P – Then we took that and ended up using it for ourselves instead.

Do you enjoy playing live?

Do Peter and Kerry have any plans to tour?

Your debut album La Trimouille is set for releases, what can we expect from it?

Do you find writing music easy to do, will there be more releases from you soon?

K – No, not really, but we found a way to make it work for us.
P – We were both living in different places, so a lot of the writing process involved sending ideas over email.

What does the rest of 2012 have in store for Peter and Kerry?

P – Hopefully just recording and performing more for you guys!

If you hadn’t united as a duo, would you both still be in the music business?

P&K – We personally feel that it was quite a chance occurrence that we started this band, but we’re really glad we did.

Do you enjoy meeting fans?

P&K – Of course. We love speaking to people at gigs, even if we’re both a bit shy.

Have you any advice for up and coming acts like yourselves?

P&K – Just keep enjoying it, and concentrate on what you’re doing instead of others.

The single ‘F*****g Around’ is available on iTunes from May 7. Taken from their debut LP La Trimouille, due in July. Peter and Kerry play XFM Exposure at Camden Barfly on May 9.
facebook.com/peterandkerry