Troubled rocker Pete Doherty has left a music event nearly Â£50,000 out of pocket after he was sent to prison this week. Doherty was booked to appear on stage at the GoBusker.com
UK Battle of the Bands on April 27th at east London venue 93 Feet East, but now the whole event is in turmoil because he was sent down for 14 weeks.


Photos by Fabrizio Belluschi
The event is the biggest ever search for an unsigned indie act in the UK and thousands of bands entered on the website to win the prize of Â£10,000 development money and a record contract with the site. Doherty was set to be a judge on the night and perform a couple of songs. 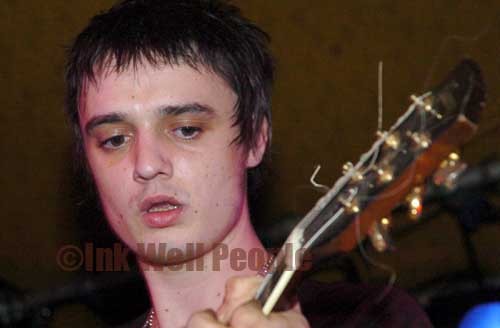 An organiser for the event, Joe Lucas said: “He’s really let us down, we have been dealing with his people for ages and so much work has gone into this event. It’s going to be a nightmare getting another headline name at short notice.

“We will still be putting on the event, but we’ve already spent a fortune on flyers, marketing and advertising all with his name attached, all of that will now have to be taken down and we will have to start all over again.”

Doherty was to be paid thousands of pounds for his appearance but thankfully the organisers didn’t agree to pay the money up front so they now can look for other performers.