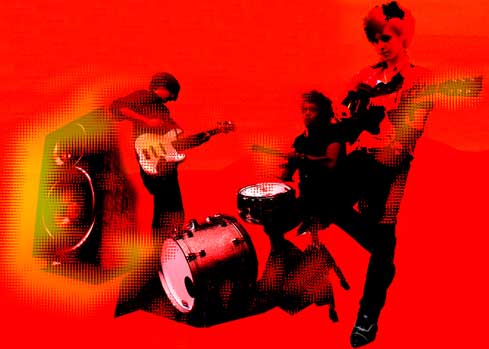 Addicted To Lust has been spot played on Punky Radio. Pole Dancer has received spot play on BBC Essex Introducing, has been on Total Rock Radio’s playlist for two weeks in a row, and has been played on Pete Mitchell’s show on BBC Radio 2.

The single is available to order via 7 Digital online or via SMS â€“ text REDTRACK to 78789.
Texts cost Â£1.50 plus normal operator charges.

RedTrack were born late in 2006 and quickly the band were “discovered” by London management/ production company Northern Blue Music. At the time RedTrack had no studio experience and about eight songs. Northern Blue planted RedTrack in Maple Recording Studios in Southend-on-Sea and by March 2007 the band were deemed ready to record their debut single.

The band were due in the studio to record â€˜Pretty Boy/Insideâ€™ on March 11, 2007. The day before their studio debut, Phil was attacked by two men wearing tracksuits and baseball caps. The attackers shot Phil in the leg with an air-rifle and hacked him with a meat-cleaver on the head and across his forearm. Phil had 20 stitches in his head and needed emergency microsurgery on the severed tendons in his arm. Phil permanently lost the use of two fingers on his left hand. Not good for anyone, let alone a bass player the day before he was due to record his debut single.

In August, 2007, RedTrack got back in the studio with Phil on the bass and the band were able to record and release their first single (Pretty Boy/Inside) in October 2007.

The single received some great reviews and was featured on Steve Lamacqâ€™s Radio One show. On the strength of the single and their great live shows Red Track also got some great supports with bands including The Maccabees and The View.

The bandâ€™s second release, the EP â€˜Wait Around/Miss You Notâ€™, released July last year, has been featured on Zane Lowe’s “Fresh Meat”, and been championed by Colin Murray of Radio One and again by Steve Lamacq on 6 Music. Billy has also performed an acoustic session for Kerrang Radio.

RedTrack sold out both of their single launch parties at Dublin Castle in Camden last Summer. Since this release, they have gone on to play supports with Get Cape, Wear Cape, Fly, do a 5 day tour of Scotland to rave reviews and play an acoustic session on Talk 107 FM.
“Perky indie-punk scuffles” NME Magazine, NME.COM