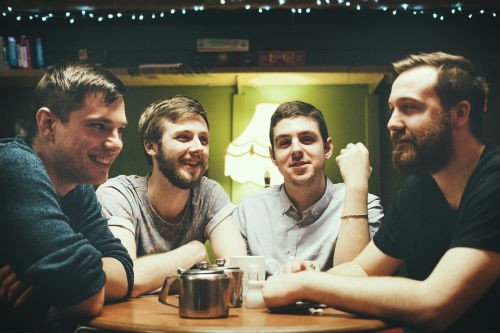 PKPB have already played sold out shows with The Twilight Sad, And So I Watch You From Afar, The Xcerts and British Sea Power, even ‘the curse of the merch stand’ hasn’t put them off playing a blinding live set; every time they’ve set out on tour their merch stand has either been robbed or set on fire…

How are you guys feeling about your debut album ‘Building Homes From Broken Bones’?

We’re just really excited to get it out there and get it heard now. We’re really proud of it and it was a lot of fun to make, but there’s been some struggles with money and the usual stresses of being in a band doing everything themselves so there’ll be a big sense of relief once it’s released.

What’s the story behind the title?

I think we’d like to leave that up to the listener to make their own interpretation. The album name came last, all songs were written and titles decided and Building Homes from Broken Bones was something that we felt encompassed the ideas that are going on throughout the record.

What influenced the music and feeling of the album?

We’ve always said that we listen to a lot of music between the 4 of us but there’s always been a specific influence on the core sound of the band stemming from the likes of Smashing Pumpkins, Brand New, Manchester Orchestra, Mogwai and the like. I know I was listening to The Seer by Swans and Liars’ WIXIW a lot at the time of writing. I don’t think they’ve necessarily come through on the overall sound of the album but I had them in mind when writing guitar parts.

You took a massive break from 2011 till your debut album now, what have you been up to?

We made a conscious decision after the last release that we wanted to make an album and that we’d do it our own way and take as long as we needed to get something that we were happy with. We decided we weren’t going to release something just for the sake of keeping things ticking over and making sure people kept an interest in the band, the album had to be the priority and we were going to focus all our efforts on it.

Having said that, it probably could have been released quicker. Money has been a big factor, we’ve paid for this album ourselves and we lost our bass player too so having Gregor come in to the band has felt a little like starting from scratch, in a good way of course. 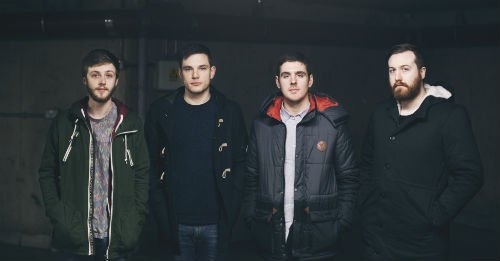 ‘Scarce’ was the free track recently released from the album – it’s quite a heartfelt track, what is it about?

Ben had the lyrics from the start which is quite unusual for us. Usually we have a complete instrumental song in place and the lyrics are added last. He had just moved from a flat share with 4 other people and was now, for the first time, living on his own in a 1 bedroom flat in Dalry, Edinburgh. His neighbour was an alcoholic and once he had worked this out, every sound from next door set his mind off wondering what was going on through the wall so the song became about him.

Lyrically there are a lot of different ideas going on throughout the record but we started to notice a theme of human weakness running throughout. Scarce plays it’s part and it feels good knowing that the first piece of music we wrote in this incarnation of the band is the first taster that we get to throw out there. We hope you like it.

There are quite a lot of bands singing in their accents these days, is this a deliberate choice?

Well everyone has to sing in an accent of some sort, it’s not deliberate. A singer should do what comes natural to them. We don’t really understand why anyone would sing in some kind of put on accent that wasn’t their own.

You’ve played with lots of big acts – British Sea Power, The Twilight Sad, And So I Watch You From Afar – what’s been your favourite and why?

We played a show a few years ago opening for The Xcerts in Edinburgh. It was a big venue with a big PA and great foldback, we just had a lot of fun blasting out our set, the crowd really got into it and there were lots of smiles when we came off stage. The Xcerts were really cool too, they gave us some good tour advice at the end of the night. It would be criminal not to mention the Twilight Sad show as well though, we love that band so it was dream come true to open for them. I think we learned a lot from watching them.

Are there plans to play live soon and will you be playing outside Scotland?

There’s definitely a tour in the works and we have a few dates booked in England so far but we’re still looking for more before we announce anything. Hopefully we’ll have more information soon.

If you could collaborate with any current artist / band, who would it be and why?

To be honest we’re quite happy to be working away ourselves and doing our own thing. It’d be nice to share some ideas with the guys who do those nice big dreamy electronic soundtrack like soundscapes, maybe someone like Jon Hopkins or Flying Lotus. Me (Fraser) and Kieran both listen to a lot of Hip Hop so some collaboration with a really Badass Gansta Motherf*cker would be fun as well.

Finally, can tell us a strange story about the band (or a band member).

Gregor likes Steps. When we first met him we asked him what music he was into and he said “Everything from Dillinger to Steps” we thought he was just joking or maybe just nervous because it was the first time we’d properly met, but no, he loves them, legit.