With the release of this debut album in 1983, Paul Young was immediately hailed as an intriguing synthesis of the old and the new.

Blessed with a classic blue-eyed-soul voice, in the Bobby Hatfield/Daryl Hall tradition, Young pays homage to R&B tradition with respectful covers of Marvin Gaye’s Wherever I Lay My Hat (That’s My Home) and Booker T and the MG’s’ Iron Out the Rough Spots.

Laurie Latham’s sparkling production is absolutely of-the-moment. 25 years on it still sounds fantastic Paul’s own songs songs are are quirky and New Wave-influenced while his choice of covers is rather interesting.

He covers Joy Division’s Love Will Tear Us Apart and three songs by Jack Lee (of LA’s pop-punk Nerves) among them the exquisite hit single, Come Back and Stay. In retrospect, No Parlez is unmistakably a product of the early ’80s but Young’s voice and those inescapable pop hooks remain timeless. 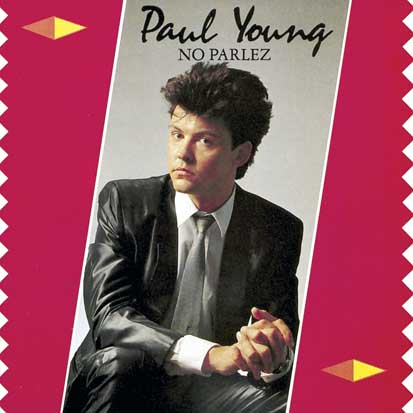 The album was also a commercial success – the single Wherever I Lay My Hat maintained the number 1 spot for most of the summer of 1983.

This was followed by Come Back And Stay which also shot to the top of the charts.

Paul Anthony Young was born January 17th 1956. His interest in music dates back to when he was very young, when he learnt to play the piano and then the guitar.

On leaving school he worked with his father for Vauxhall Motors and played in various bands at night. He played Bass guitar in his first band but eventually lack of demand for bass players led him back to his first passion, singing.

These were lean times musically because his preferred style of music; Soul, was not particularly popular.

However he managed to sing in various bands such as Kat Kool & The Kool Kats and later in the better known Street band. In December of 79 the Street band broke up and Paul went on to form the Q-Tips.

During the next two years Paul introduced himself to more and more of the British public through the Q-Tips extensive touring playing 700 shows all over the UK.

This period of intense activity gave Paul the chance to develop his unique voice and stage persona. The Q-Tips went there separate ways at the end of 82 and Paul signed as a solo artist with CBS/SONY Records.

With the release of his second album The Secret Of Association and the success of Every Time You Go Away his status as a world star was confirmed.

Paul still continues to write; record and play live and can be seen on the Here & Now Tour this summer.