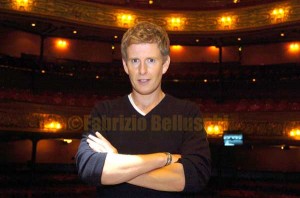 COMEDIAN turned actor Patrick Kielty has revealed he single, despite turning up to Andrea Corrs wedding recently with a beautiful woman on his arm.

The Dundrum funnyman, who is in Belfast on the promotional trail for the play A Night In November which shows at The Grand Opera House later this week said heâ€™s definitely not dating â€œat the minuteâ€.

He said: To be honest with you the girl I was at the wedding with was Melissa, a friend of mine who came over from Switzerland. She’s not my girlfriend though, sheâ€™s just a friend, I’m actually single at the minute.

The star doesn’t have time for a woman given his huge work commitments with another tour looming as well as taking up the chance to go back on stage as football fanatic Kenneth McAllister.

Although he believed his time as Kenneth was gone forever Patrick revealed producer Martin Lynch and promoter David Hull can be â€œvery persuasive guys.

He added: I thought I had waved goodbye to Kenneth but the BBC had followed me around and did a documentary on the show. But it only went out nine months after the show had finished.

â€œThen as it turned out there was this whole crowd of people who starting ringing up wanting to see the show again. I’ve been in America doing stand-up this year and this was the only time we could get the Opera House at the same time I was available.

â€œSo it looks like I’m going to be coming back as 37-year-old Kenneth McAllister until I’m 67 with a 70-year-old wife and a 105 year-old da.
Patrick will play Kenneth McAllister in A Night In November at The Grand Opera House from September 7-11. Tickets available from www.goh.co.uk.
EXCLUSIVE by Tina Calder
Photo by Fabrizio Belluschi