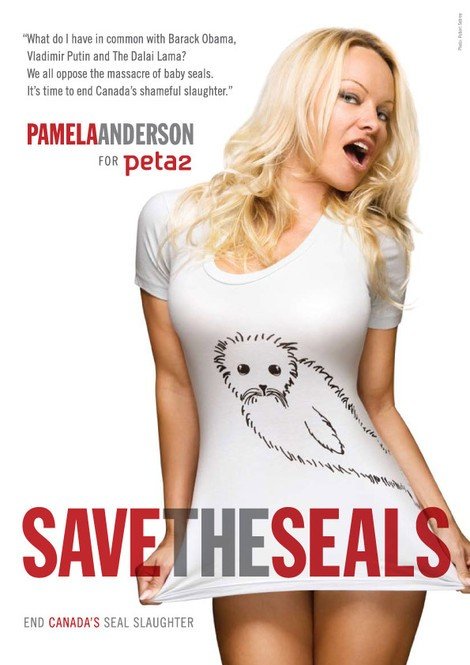 Pamela Anderson just made on PETA’s behalf, an appeal urging the World Trade Organization (WTO) to uphold the EU’s ban on seal-fur imports.

The WTO’s public hearings on this issue begin in Geneva on February 18. As the annual baby seal slaughter approaches this spring, all major markets have banned pelt imports, including the EU, Mexico, Taiwan, the U.S., and, most recently, Russia, which imported 95 percent of Canadian seal skins. This change marks one of the biggest victories in the history of the international animal rights movement.

As a proud Canadian, I’m saddened that Canada is trying to use the WTO to delay the inevitable demise of the cruel commercial seal trade by challenging the EU’s ban on seal-fur imports. In addition to the EU, the U.S., Mexico, and Taiwan as well as Russia—which had been importing 95 percent of Canadian seal pelts—have all banned seal fur and will not tolerate this annual slaughter. This is an ethical matter for a wide and diverse range of countries, and there is now even a bill being debated in Canada that would phase out the seal slaughter.

I became active in animal issues well before my Baywatch years and am now honorary director of PETA. In light of next week’s hearing, PETA and I urge the panel in the seal products dispute to consider these facts and to uphold the EU ban:

· The massive spring slaughter is inherently cruel. Sealers shoot and bash in the heads of helpless seals when they are just weeks old.

· The commercial slaughter has nothing to do with native practices and involves no tribal communities. The tiny Inuit subsistence hunt happens in a different part of the country, involves adult seals, and is protected both by Canadian laws and a clear exemption in the EU ban.

· The commercial seal slaughter is merely an off-season cash grab for the massive fishing industry and accounts for less than 1 percent of Newfoundland’s economy.

· The EU’s seal ban is even-handed, targeting commercial cruelty not only in Canada but also anywhere else in the world that it occurs.

There are no remaining markets for seal fur—the only reason the Canadian government continues to defend this dead industry is because both political parties crave Newfoundland’s swing seats in Parliament. But as this recent editorial shows, even local sentiment is turning.

The WTO requires its members to exercise judgment as to whether bringing a dispute will be fruitful. Instead of wasting an estimated $10 million to challenge the EU ban and offering more industry bailouts, my native Canada should devise a practical exit strategy: a government buyout of the sealing industry, which would benefit both seals and sealers.

Thanks for your time. PETA representatives will make this case personally in Geneva and will be attending the first hearing of the panel. I hope to hear that you will uphold the ban so that my beautiful Canada will finally leave this barbaric practice in the past.