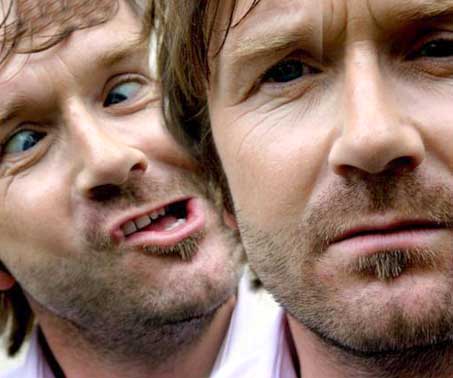 Comedian Paddy Courtney is currently 33/1 on the Paddy Power website to become the next Late Late Show host, beating the likes of Terry Wogan, Grainne Seoige and Eamon Holmes in the betting stakes!!

Paddy will be talking about this and a whole lot more when he brings his new stand up show to Vicar Street on Saturday 25th April 2009.

Paddy has been a regular comedy panellist on The Lucy Kennedy Television Show on RTE2 every Tuesday night during January. Where he asked the audience to stick a mickey in the mouth of Senator David Norris just to shut him up! He also writes a hilarious column for the Evening Herald’s HQ supplement every Thursday.

Since he sold out his debut solo show in Vicar Street last year, Paddy has been busy tickling audiences at the Kilkenny Cat Laughs Festival, The Carlsberg Comedy Carnival in Dublin’s Iveagh Gardens and at the Comedy Tent at Electric Picnic.

Ten years ago Paddy packed in his job as an accountant to pursue the life of ‘a full time fecking eejit’, as he says himself. Over the past few years he was Ireland’s most sought after MC and ‘warm up act’ for both T.V. and live gigs, including Podge & Rodge and Keith Barry.

He is one of the very few comedians to have written and starred in their own six-part comedy drama, the triple IFTA nominated ‘Paddywhackery’ in 2008. Paddy recently took up the challenge to learn the bodhrÃ¡n for the TG4 programme, ‘Faoi lÃ¡n cheoil’.

He was in good company with the likes of Oscar winning Jeremy Irons learning to play the fiddle and footballer Andy Reid learning the banjo.

Paddy continues with his acting career and will appear in the BBC drama ‘George Gently’ in March 2009 alongside Martin Shaw.

As well as his high-energy, fun filled comedy show, he promises a bit of skiddledeedee music on the night too.