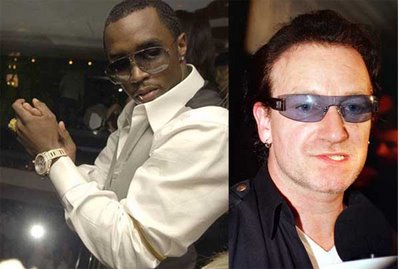 RAP star P. Diddy was stopped in his tracks in St Tropez this week by Irish rocker Bono.
The music mogul, whoâ€™s hits include Iâ€™ll Be mIssing You and Come To Me, was star stuck when he met the U2 frontman in a hot nightspot in the French resort.
Diddy, real name Sean Combs, saw Bono, who was partying with Hollywood actress Penelope Cruz, and immediately introduced himself.
A clubber said: “Diddy came over to their table and asked Penelope to take his picture with Bono.
â€œShe ended up taking about five because Diddy kept asking her to take another one until he got one he likedâ€.
The hip-hop star is sailing in the French Riviera with rapper Dr. Dre after splitting from long-term girlfriend Kim Porter.