There are less than 100 days left until Oxegen opens its doors for the music event of the year. So, to help you find out a little bit more about what’s in store, the nice people from Oxegen compiled a special Festival A-Z.

But, if you think you can do better, send your own Oxegen A-Zs to [email protected] before Friday 8th April. (putting Oxegen A-Z in subject line). There’s a great prize up for grabs for the best entry- a pair of 4 day weekend camping tickets! 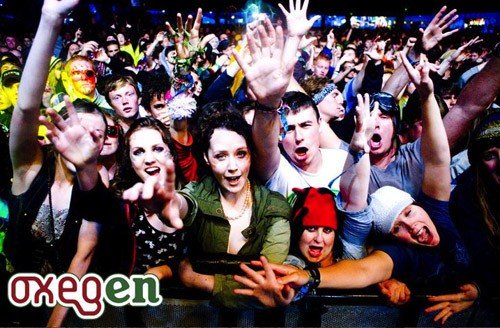 Tickets for Oxegen 2011 are on sale now and you can secure yours with a €100 deposit. For full details and to check out the full line-up to date, see oxegen.ie.

A-Z of Oxegen 2011
A is for Arctic Monkeys
Arctic Monkeys release their eagerly anticipated 4th album ‘Suck It And See’ in June. Irish fans will get their first chance to hear the new material live when the band hit Punchestown.

B is for Brandon Flowers

Brandon is no stranger to Punchestown, having started out in The New Bands tent with The Killers in 2004 before they went on to headline the festival twice. Now he returns as a solo artist for the first time.

C is for Calvin Harris
The man responsible for some of the biggest dance anthems of the last few years including Acceptable in The 80’s, The Girls and Ready For The Weekend.

D is for Deposit scheme
The genius recession busting deposit scheme is back for 2011. It’s Oxegen’s way of making sure that no-one misses out on the very best line-up to hit Ireland. Simply pay a deposit up front, make another payment in April and the balance in June, full details can be found at oxegen.ie. 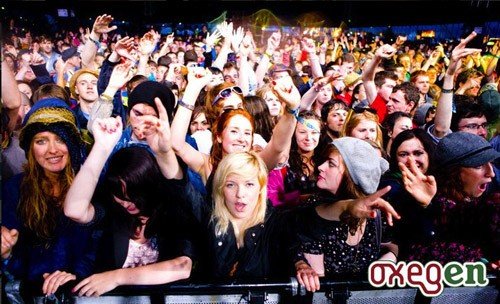 E is for Eels
Eels are one of the USA’s most critically acclaimed bands. But did you know, lead singer E’s father Hugh Everett III is the originator of the many worlds theory in quantum physics?

F is for ‘For The First Time’
‘For The First Time’ gave The Script their first Irish No.1 single when it knocked Katy Perry’s ‘Teenage Dream’ off the top spot. The Dublin trio’s headline show at The Aviva Stadium is sold out but you can catch them at Oxegen.

G is for Grohl, Dave
Foo Fighters’ frontman Dave Grohl helped us launch Oxegen in style this year when he fronted our exclusive line-up video. 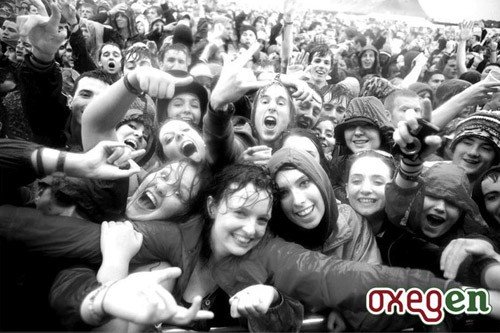 H is for Hat-trick
Paolo Nutini will complete a hat-trick of Oxegen appearances this summer after stunning performances in both 2009 and 2010. Paolo’s currently working on the follow up to his Ivor Novello winning album ‘Sunny Side Up’.

I is for Ingrosso, Sebastian Carmine
Ingrosso is one third of dance music sensations Swedish House Mafia along with Axwell and Steve Angello. They’ve had two massive Irish top ten hits in the last year with ‘Miami 2 Ibiza’ and ‘One’.

J is for Jump Around
A genuine festival anthem, House of Pain’s classic track should provoke one of the loudest sing- (and jump) a-longs of the weekend.

K is for Co Kildare
Punchestown Racecourse in Co.Kildare has played host to Oxegen since its debut year in 2004. The festival wouldn’t be possible without the fantastic support of the local community.

L is for Liam Gallagher
An icon for a generation, Liam Gallagher is one of the greatest frontmen of all time. Now, he’s coming to Oxegen with his new band Beady Eye to perform tracks from their album ‘Different Gear, Still Speeding’.

N is for The National
Ireland is fast becoming a second home for The National. Their sold out run of shows at The Olympia in November were among the most critically acclaimed gigs of last year and now the band return to Oxegen after picking up a Q Magazine Award for Best Album for High Violet.

O is for Oberst, Conor
The People’s Key , the new album from Bright Eyes, was released on lead singer Conor Oberst’s birthday – 15th February. Drowned in Sound called it “a collection of fleet, shimmering pop songs; a master-class in sonic splendour; a bold, beautiful and brilliant reinvention that should surprise as many as it will enthral”.

P is for Plan B
What a year it’s been for Plan B! Not only has his second album The Defamation of Strickland Banks gone multi-platinum but he also picked up a Brit Award for Best Male Solo Artist. To see who else is joining Plan B at Oxegen check out www.oxegen.ie/line-up.

Q is for Questions
If you’ve any questions about Oxegen, camping, travel or anything else, check out the FAQ section on oxegen.ie.

S is for Screamadelica
It’s 20 years since Screamadelica was first released. The seminal album from Primal Scream brought acid house and techno crashing into the mainstream and you’ll be able to hear it performed in its entirety at Oxegen this summer.

T is for Two Door Cinema Club
On St Patrick’s Day, the Bangor band celebrated in style by winning Best Emerging Artist at The MTV Woodie Awards in Austin Texas. If you didn’t catch their fab main stage performance at Oxegen 2010, make sure you don’t miss them this time!

V is for The Vaccines
With a top 5 U.K album record and two NME covers under their belts, The Vaccines are poised to be this year’s biggest breakthrough success. The band are embarking on a US tour with Arctic Monkeys before hitting Oxegen.

W is for will.i.am
The Black Eyed Peas’ will.i.am is one of the biggest stars on the planet. But did you know he’s also enjoyed success both as a fashion designer and an actor. His signature clothing line is i.am while he played John Wraith in his major film debut ‘X-Men Origins: Wolverine’.

X is for X&Y
Coldplay’s third album spawned the massive hits ‘Fix You’, ‘Speed Of Sound’ and ‘Talk’ and has sold over 10 million copies worldwide; making it one of the most successful albums of the 21st century.

Z is for Zimmerman, Joel Thomas. But you might know him better as Deadmau5… the man behind the mouse head. A technical whizzkid, the Grammy Award nominee has a reputation for being the most forward thinking person in electronic music right now.

To see the full line-up to date for Oxegen 2011 go to www.oxegen.ie/line-up