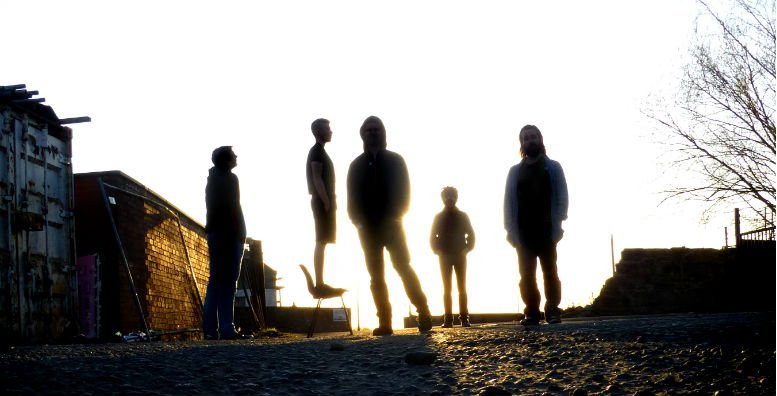 Glasgow quintet Outblinker – Jason Costello, Graham Costello, Luigi Pasquini, Chris Cusack, David Ian Warner – is a band not a brand. They “play music and aim to improve your life thusly” and with their new track called ‘Pink’, they demonstrate how electronic music doesn’t have to be cynical, corporate, sync-obsessed junk-food and post-rock doesn’t have to be meandering, delay-ridden, formulaic box-ticking…They are basically super keen to blow your face off with huge, cinematic driving krautrock: abrasive electro music with a throbbing punk-rock heart.

Their EP Pink/Blue by Outblinker is out on June 15th 2015 via Good Grief Records.

Hi Outblinker how are you?

Jason: Not bad, thank you.

Outblinker is something of a Glaswegian underground supergroup. Explain the origins of the band.

Jason: Graham and I are brothers. I think the five of us have been aware of each other for a little while, through involvement in Glasgow bands. Luigi was actually the engineer on ‘Pink/Blue’ and we decided shortly afterwards that he’d be perfect for the band as well. Thankfully he agreed and here we all are.

Luigi: I engineered the first 10” of the band then they didn’t have enough money to pay me so was pretty natural for me to join the band.

And how did the name come about and what is the meaning behind it?

Jason: I find naming a band the least enjoyable activity associated with music, to be honest. ‘Outblinker’ came from playing around with random words and translations there’s no real meaning behind it.

Chris: Or, the origin of the name is intellectually complex and profoundly deep, just as we see ourselves.

You have an interesting sound a mixture of postrock, experimental and electronic how do you approach the writing process for your songs?

Jason: We get in a practice room, begin playing music without much preconceptions of what we’re doing, and record the I results. Afterwards, we dissect the recordings and listen for sections we like. The tracks generally begin to coalesce late in the process.

Chris: Yeah. We improvise a lot. Sometimes we just stumble across an interesting sound or pattern and that goes in the idea bank for the more structured sessions. A lot of my favourite electronic music started in a studio and then was translated into a live setting but we followed a much more indie route. We had about 13 hours of fairly solid recorded demos prior to deciding which tracks to use for the EP. 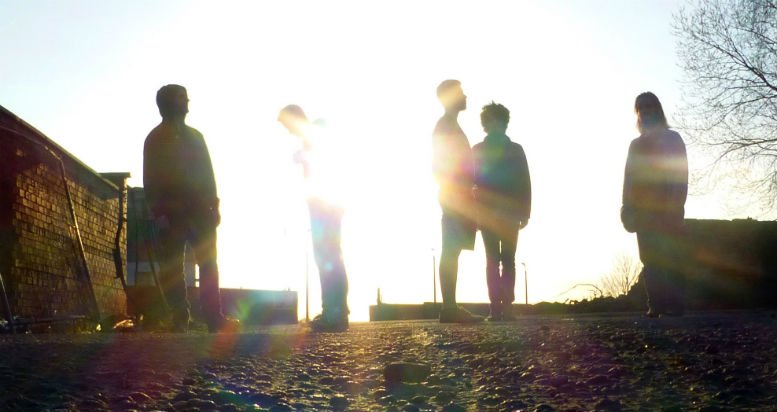 You are working with Ben Powers of Fuck Buttons for your debut album. How did that come about?

Chris: Ben and myself have a lot of friends in common and we had spent a night drinking after an Edinburgh Fuck Buttons show in the weirdest of circumstances (I was at the drunken windup, his former tour manager was literally trying to strangle me and my best friends’ ashes were in a box in the middle of the table).

When he and his wife moved up to Edinburgh last year we all started hanging out and clicked personally and creatively. It goes without saying that FB are an influence (as is Blanck Mass), in a large part because Ben and Andy are fearless musicians.

They take chances and make artistic and creative decisions that elevate them above their contemporaries. Basically we wanted someone to encourage us to take those same chances with our music. When we are composing, the ideas are there, but we are a young entity and can sometimes lack the confidence to push the envelope, thus having the input of someone like Ben is huge for us.

Plus he’s a great guy to hang out with so who better to take up to the North of Scotland for a week of loud stupidity in the wilderness?

Luigi: I was smoking a spliff listening to Sweetnighter of Wheater Report and Chris told me “Hey dude, we are going to record with Ben as a producer” I said “ Oh, cool, does he know how to make focaccia or not? ”

You have indicated that modern electro is soulless, corporate and masquerading as art. Why do you think that is and what can be done to alter the landscape of the genre?

Chris: Much modern electro but not all. I should probably qualify that before we get an unshakeable reputation as curmudgeons. Personally, it strikes me that a lot of it has become a fairly cynical exercise in musical

LEGO: using a computer programme to stick a bunch of samples together as per a marketable formula which has one eye on sync revenue and the other on Zane Lowe (or spawn of). The layers of irony get no less tedious as groups rip off some of the worst 80s pop and frequently manage to say even less than music that was vapid to begin with. A photocopy of a photocopy of a photocopy.

Acts like Fuck Buttons, Emeralds, Vessels, OneOhTrix etc, as well as a host of excellent female solo acts that have emerged including Zyna Hel, Ruby, Ela Orleans and Annekke Kampman in Scotland are gratefullyacknowledged proof that the genre obviously has much to offer though.

As for what can be done to alter the genre’s landscape?

I think music in general could benefit from us all being a bit less tolerant of phony bullshit.

You’ve been compared to the likes of Godspeed You! Black Emperor and Turing Machine? Would you say this is representative of your sound and where would you say your sound fits in today’s landscape?

Chris: Both are flattering and hopefully accurate. I would probably add Trans Am and Neu! to that list too. It’s tough not to sound like your influences early on but hopefully we can begin to carve out something distinctively us as we get a bit more confident. Get into our Kid A phase quick and deconstruct music to a point where it’s just a bunch of sine waves we throw at the crowd, like performance theatre.

Jason: I love both those bands so that’s a compliment for sure.

For those who haven’t seen you play live, what is an Outblinker live show like?

Chris: Loud and immersive like a scalding hot sonic bath.

Chris: Ennio Morricone in terms of brilliance. Failing that, probably Haim so we could do nothing but Bananarama and Kim Wilde covers beforehand and expose the awful truth.

Jason: ‘American Don’era Don Caballero. Or Autechre. Basically any artist I like.

Luigi: Foo Fighters with the original line up: Kurt Cobain and John Lennon both on drums.

What can we expect from the band for the rest of 2015 and beyond?

Jason: Our record ‘Pink/Blue’ is due for release in June (on Good Grief Records / GabuAsso), accompanied by a short UK tour. We’re also currently working on an album and we’ll be touring France and the north of Spain in the Autumn shortly after that’s done. So we’re quite busy.

Chris: Yeah. Some tours around the UK and Europe, another EP, a video or two, a mooted collaboration with some other psychemonsters, a finished album for early next year and probably the glazed looks of five underground DIY dudes who bit off more than they could chew.