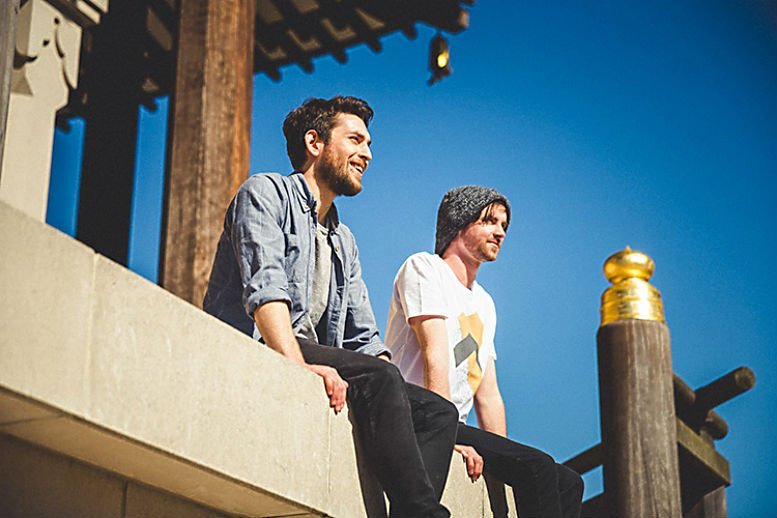 They describe their fresh and sleek uplifting pop sound as “layered vocals over a mixture of live and electronic instrumentation – pop writing in an alternative setting.” In case you missed them check out ‘The Night and ‘Twin’.

2 – So far all our music is self written, produced and mixed.

4 – We have a five piece live band (and play with visuals made by Ian.)

5 – We’re piecing together our first album as we speak.

Can you talk about your new double-A Side single ‘Fiction’ / Dress For That’?

We found we had two songs with a bit of an 80s vibe and thought it would be cool to couple them up.

We constantly start recording new song ideas so we’ve always got a pool of things to work on. When one thing particular stands out or we get a couple of ideas that work well together we develop them and decide how much we like them.

We’d both been playing in bands with more traditional instrumentation and wanted to try something with some different sounds and styles. We lived together at that point so we spent many late nights in front of the computer making strange noises and trying to work them into a musical arrangement.

It can be slightly uninspiring sometimes, as it’s not really encouraged to put out a lot of material (especially at first). It would be great if putting music out wasn’t such a slow and considered process and we could just get out a bunch of material. Although saying that, I suppose this could lead to more double albums which are generally pretty awful. We aren’t here to shake up the traditions of the music industry just yet (he says plotting a triple album…)

My friend David Harks showed me Unknown Mortal Orchestra the other day. They’re really pushing my buttons right now. I also think Anthony Gonzalez of M83 is a genius.

Your live dates on 15th May at Alt Escape in Brighton and 9th June at The Waiting Room in London… Tell us why we should be there?

We don’t do that many gigs at the moment so if you like the music, you don’t have many opportunities to catch it live. As I mentioned, we play with visuals where possible and have three friends helping us onstage. It has a life of its own as our extra members all have very strong

We’re continuously writing and recording new music that may or may not make it onto our first album. We’re not particularly rushing for an album just yet, but it’s exciting to keep it in mind. Some touring is also definitely in order.