Even before the Oscar winners are announced, several Academy Award-nominated films have already earned an important and respected honor: the “No Animals Were Harmed”Â® disclaimer from the American Humane Association.

American Humane’s Certified Animal Safety Representatives(TM) monitor the use of animals on more than 1,000 productions each year. 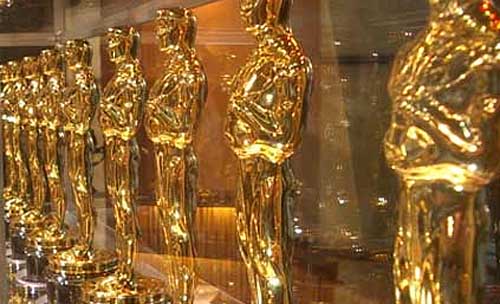 This year, the nominated productions that did the right thing by keeping their animal actors safe include “Avatar,” “Harry Potter and the Half-Blood Prince” and “Transformers: Revenge of the Fallen.”

In addition to commending these films on their treatment of animals and their nomination by the Academy of Motion Picture Arts and Sciences, American Humane recognizes each of these films with a “Pawscar” — an unofficial, animal-centric spin on the Oscars: 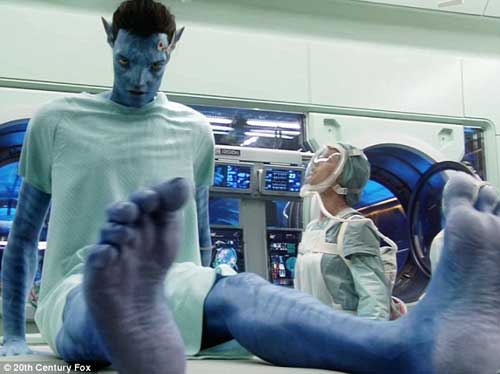 These six-legged horse-like creatures were created using motion-capture technology, in which real horses wore miniature computerized motion sensors near joints and facial areas to capture their movements. The live action was performed in a motion-capture studio covered in dark fabric and carpet (called a “void”) and then recorded as computer animation data, which was then mapped onto a computerized 3-D model.

Human actors wear a bodysuit for the “capture,” but animals need to be “captured” differently because of their body shapes, fur and other characteristics. To prepare the animals for having their motion data recorded, trainers shaved the areas of hair where the movements would be recorded, such as near joints and on the face.

Velcro was attached to the assigned areas using a non-toxic, non-irritating silicone adhesive. White light-reflective balls were placed onto the Velcro to capture the motion data onto the computer. The exception to this was for horses’ tails, which were not shaved, but rather, wrapped in a sensor-laden material. The adhesive and any additional markings were washed off each evening after filming ended.

Best Newcomer Actor: ‘Harry Potter and the Half-Blood Prince’
A Neapolitan mastiff named “Uno” had been adopted by her owners/trainers prior to becoming a rookie animal actor.

Trainers speculate that she was abused by a previous owner because she initially would cower around noises and crouch to the floor upon being approached too suddenly.

But, while working on the set of “Harry Potter,” surrounded by a patient owner/trainer and other affectionate cast and crew members, she gained confidence and trust and adored the attention everyone gave her. Trainers believe Uno is destined to be an admired movie star in no time!

Best Cameo: ‘Transformers: Revenge of the Fallen’
As he has done in other films, director Michael Bay cast his own dog in a role. 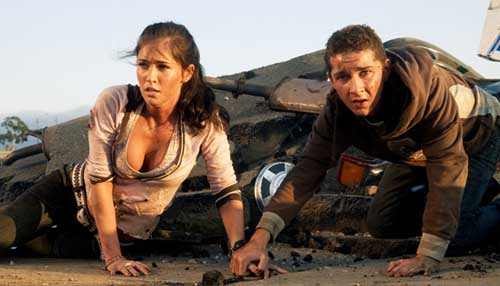 His bull mastiff, playing the role of Mikaela’s (Megan Fox) dog, performed mild action on screen, which was effortless for the canine actor, considering his cinematic “human lineage.”

And while the American Humane staff members were viewing a pre-release screening of the film as part of the disclaimer process, this massive mastiff made yet another cameo….by sitting at the staffer’s feet during the screening. One might say this dog loves to check out his own work (or kiss up to a Pawscar judge)!

If Animals Could Vote…
Just as the Academy has its own reasons for granting a film the coveted Oscar, American Humane’s Film & Television Unit — celebrating its 70th year as an intrinsic player in this industry (longer than some studios) — has its own criteria as to why a particular picture should receive an award of excellence.

If the animal kingdom were in charge, here are some of the awards that might be presented on Oscar night to additional films that have received American Humane’s “No Animals Were Harmed” disclaimer but were not nominated for Academy Awards: 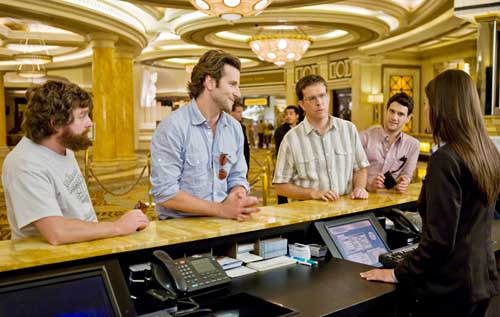 As the tiger enters the car, one of the men pretends to “hump” the tiger. So, considering the ferocious nature of this exotic animal, how might a person do that to such a beast? To capture this scene, one trainer hid inside the police car while another trainer doubled as the actor and guided the tiger into the car. He then pretended to hump the animal as it entered the car.

This same scene was then filmed again, only this time the actors were used along with the trainer. The actors held the end of a long leash, and a trainer held the middle part of the leash that actually connected to the tiger. In post-production, the trainer and his portion of the leash were digitally removed, making it appear as if the actor was really leading the tiger.

The actors were then filmed walking to the police car and pantomiming the fake sexual motions, which were later combined with the footage filmed with the trainer.

Biggest Diva: ‘Did You Hear About The Morgans?’
Who is the only male actor more famous than Sam Elliott in this film? Well, that depends on who you ask. Hugh Grant is a leading man in several films, but “Little Bart” the bear is a big star in his own right. 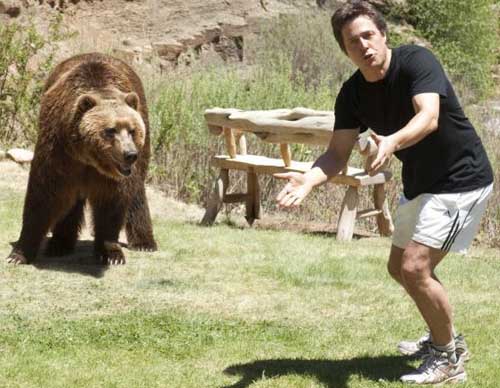 One of only a handful of Kodiak bears to work in the film industry, this 1,100-pound actor has worked on numerous films and commercials. But has his fame gone to his head?

Grant teasingly told the press that the bear was so demanding, he would not leave his personal trailer until he had “12 cans of iced tea and had been hosed down from head to foot” (which American Humane assures was not the case).

Although the famous human actor joked about the famous animal actor, the excellent trainers and Certified Animal Safety Representatives were nothing but serious when it came to making sure this “furry diva” was well-treated and protected, along with his human co-stars.

Best Action Scene: ‘The Proposal’
If any scene in this film could leave more of an impression than the infamous naked scene between Ryan Reynolds and Sandra Bullock, it would arguably be the scene in which the family dog is snatched up by an eager eagle, which flies off with the pup in its mouth. 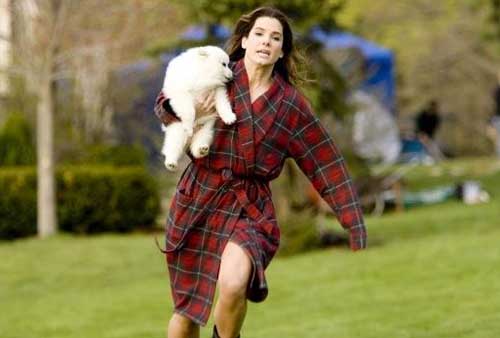 Thanks to great editing and a trained eagle that scooped up a sack made of green-screen material, viewers were left believing that this mighty bird gracefully sought vengeance on this yipping dog by flying him around and dropping him onto Bullock’s character below. In truth, the dog and eagle were never even in the same shot together.

Best Animal Gore: ‘Drag Me To Hell’
In many horror films, animals are shown in scary or gory situations, typically to cause discomfort to viewers regarding the violation of animals’ innocence. 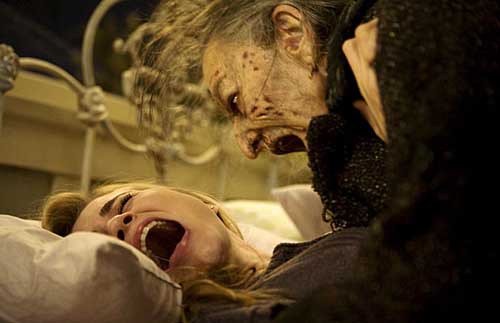 Sam Raimi (of the “Evil Dead” films and “Army of Darkness”) knows a thing or two about bloody horror films, and in his 2009 release, he employed quite a bit of animal gore, ranging from a man vomiting a cat (which was fake) to a man sacrificing a goat (which was animatronic).

But American Humane made sure that the live cats and goats on set were safe from any horror or gore. 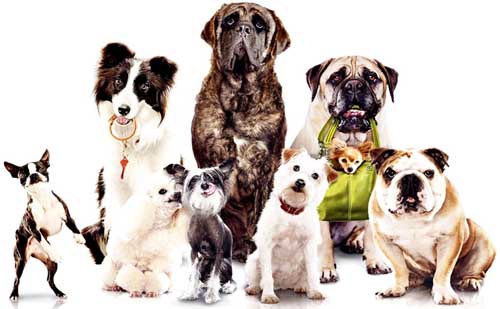 Near the end of this film, main characters Andi and Bruce release all the dogs from the shelter, which then chase the teens’ van down the street to the hotel. Trainers rehearsed the dogs for several weeks to master this well-choreographed scene, which involved the most dogs ever filmed in a single scene on an American Humane-monitored film.

Trainers released the canine critters from their marks — the small dogs were released last, so the larger dogs would not accidentally run them down. The vast majority of these animal actors were rescue dogs, and they had a tail-wagging blast running around on set and being given so much attention and praise.