Somaya debuts her first independent music video “Ooh baby baby”, produced by Scoop De Ville. With over 21 million views and more than 700,000 friends, Somaya Reece, is the #1 Latina on MySpace.

Somaya Reece, hailed as “The Next Sophia Loren”, is a voluptuous vixen with 38D-28-46 dimensions. It’s easy to see why this Salvadorean beauty from South Central was recently named the Hottest Latina in Music by Maxim en Espanol, UK and Philippines. 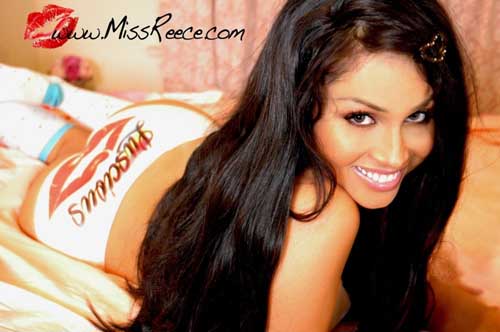 The ultimate triple treat, Somaya has already proven herself as an actress, a model and a musician. As an actress, she has participated in American Psycho(2002), The Scorpion King (2002), Ride or Die (2003), Miss Cast Away (2004) and in the hit television shows Girlfriends and Entourage. In 2008, Somaya was nominated “Internet Hottie” By Spike TV’s Guys Choice Awards; Telemundo called her “The Latina Jessica Rabbit”; and she was voted “Hottest Woman on the Web” by E! As a model, she has appeared in high-profile campaigns for Ralph Lauren, DKNY, Colgate, Pepsi, Budweiser, and Coors Light.

As a musician, Somaya has had over 3.6 million spins in just ten and a half weeks for her debut single “Mira mi pum pum” and was the first unsigned artist to reign 18 weeks on the “top ranked” music charts as a “featured artist” on imeem.com

Somaya has proven to be a successful viral/internet marketing powerhouse. Who knows? Maybe she could be he next Lil’ Wayne! “My hard work is beginning to pay off and, so far, has allowed me to purchase my first home, a beachfront house in Belize,” she says happily. “Now, I am working toward acquiring my second property here in LA for my parents!”

Born and raised in South Central in a freezing garage with her family, working 3 jobs and getting no sleep, she comments, “I went through years of financial and emotional struggle to get here. No managers helped me. I did it on my own! All to help feed my family. I was once living “la vida loca.” The “thug life” almost killed me a grip of times. I changed for the better of my family and to motivate and inspire you You gotta respect that.”

Somaya fans will now be able to see her on missreece.com where she will be debuting her “first” independent music video. Besides her website, Somaya now has a deal with iTunes and has begun working with billboard charting producers such as Scoop Deville, The Pharmacy, and Qura Rankin AKA 007 Blaq.
ShareNow.com