Dresden Dolls’ front woman Amanda Palmer comes to Belfast for a one off gig in the intimate setting of Auntie Annies on 28th September.
The Dresden Dolls’ Amanda Palmer is a true entertainer: the bisexual front woman most noted for being the lead singer of the cabaret-punk duo doesn’t just wear outfits â€” she dons costumes and stage makeup to accompany her charismatic and playful performances. Her typical stage look is in the vein of a gothic pinup girl, and when she’s pounding on her piano, there’s no chance the focus could be on anyone else. 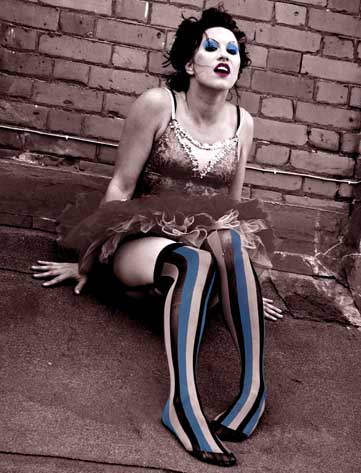 Palmer is noted for her vocal talents as well as her on stage performance. She won Best Female Vocalist in the 2005 WNFX/Boston Phoenix Best Music Poll. Her solo album entitled “Who killed Amanda Palmer” is out now, and is already in recording in Nashville with Ben Folds who is producing and appearing on the album.

For a captivating performance with a voice to match don’t miss Amanda Palmer at Auntie Annies.